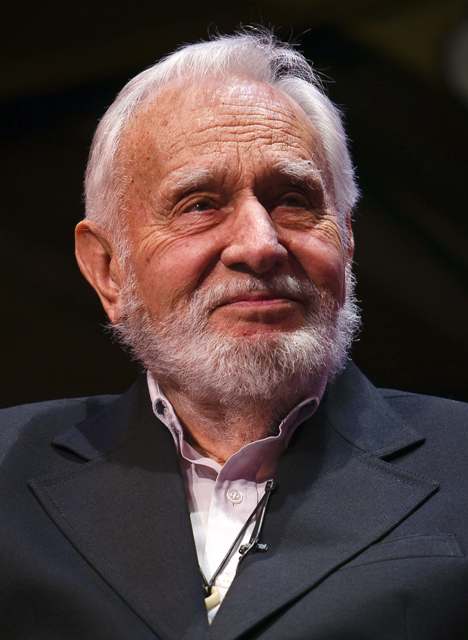 slideshow
Russ Garcia, an early West Coast jazz-classical theorist, composer, arranger and teacher whose trombone-centric big band scores in the 1950s could swing with pixie delight and jack-hammer power, died on Nov. 19. He was 95.

I interviewed Russ in 2008 about his life as well as his assertion that he had been mistakenly overlooked by the Academy of Motion Picture Arts and Sciences when Oscars were awarded in 1972 for the score to Charlie Chaplain's Limelight. My interview with Russ is here and my interview with Russ on the misplaced Oscar is here.

Just two weeks ago, Russ and his wife Gina “attended" two birthday tribute concerts on a laptop screen via Skype. The concerts were staged in Oakland, Calif., and New York by singer Shaynee Rainbolt in tribute of the arranger's birthday back in April. Russ had been scheduled to attend both concerts&#151but a collapsed vertebrae compelled his doctor to advise against the trip. Which must have been tough for Russ, since his energy level, optimism and conducting hands were unaffected by the affliction.

Russ began as a trumpet player in the late 1930s and showed an early ability to arrange for bands. He gravitated toward arranging the way most children take apart gadgets to find out why they don't work. Unsure why his first arrangement for Me and My Shadow didn't sound as expected, he bought a stock arrangement and figured out the problem. The rest came easily, he said.

After World War II, Russ took at job as a teacher at the Westlake College of Music, a California school set up to instruct the growing number of musicians settling in the Los Angeles area who wanted to learn multiple instruments and arrange for movies, television and recording sessions. Russ taught a young Bill Holman among other aspiring musician-veterans who were eligible for a free education under the G.I. Bill.

His first credited arrangement was for Harry James in 1947—It's Awfully Lovely Out Tonight—when James carried a big band and full orchestra with strings. Russ also wrote for Buddy DeFranco's Orchestra in 1953 (Love Is for the Very Young and From Here to Eternity) and Bud Shank's quintet with strings in 1954. Russ embarked on a prolific pace in the 1950s, often being brought in to ghost-complete orchestrations for records and films that other arrangers could not finish in time.

Among Russ' most notable album in the 1950s was Ella Fitzgerald and Louis Armstrong: Porty & Bess,  which some people called “Whipped Cream and Sandpaper," Russ said.

In the late '40s, Russ wrote one of the first “how to" books for arrangers interested in commercial band and movie scoring. Entitled The Professional Arranger-Composer, Russ wrote it by simply expanding on his instruction outline for his college classes and having his wife run off copies. It's still in print today.

In the '50s, Russ was one of the most highly regarded big band arrangers in Hollywood, which was already populated by fast, brilliant writer-orchestrators competing for work in the pop and jazz markets. Russ' particular gift was giving trombone sections a voice. Instead of using them as an occasional blare, Russ scored trombones as a dominant choir, teasing out their natural appeal to the human ear. He recorded several albums with his four-trombone band, including several with vocalists.

Russ and his wife Gina became members of the Bahá'í faith in 1955, and in 1966 they sold all of their possessions to buy a boat and sail around the world as Bahá'í teachers. Eventually, Russ was invited to perform and conduct in New Zealand, where he and his wife bought a house and settled.

But the move may have cost him an Oscar statue. According to Russ, he had orchestrated Charlie Chaplin's Limelight in 1952. But when the film was awarded an Oscar for Best Score in 1972, Russ had already retreated to New Zealand from the Hollywood scene, and the statue was given to Larry Russell in error, Russ said. [Russ Garcia with Charlie Chaplin]

According to Russ, the Academy of Motion Picture Arts and Sciences had goofed, mixing up Russell Garcia and Larry Russell. But there was little way to iron out the error. By 1972, Larry Russell had died and his family had accepted the statue on his behalf, seemingly unaware of Russell Garcia's claimed role. Despite repeated efforts by JazzWax and other blogs to convince the Academy to review the original score for Russell Garcia's orchestration stamp, nothing has been  done to clear the air.

Sadly, Russ never received credit from the Academy for the film, and the Academy never conducted an official investigation or issued a public statement on the matter. Larry Russell's family contends that Larry Russell and not Russ was the film's orchestrator, leaving the entire matter in limbo. [Pictured: Charlie Chaplin after being awarded an Oscar]

For Russ, such matters weren't front-burner issues anyway. In fact, I brought up the matter during our interview after discovering a 1985 interview while researching him prior to our conversation. Russ said at the time that he was hesitant to rehash old matters but agreed to answer questions.

In the '60s, Russ shifted to science-fiction movie soundtracks that were more experimental than traditional jazz scores, leaving some purists to raise an eyebrow and overlook his earlier jazz contributions. More recently, Shaynee Rainbolt discovered his recordings and convinced Russ to collaborate with her on Charmed Life: Shaynee Rainbolt Sings Russell Garcia.

A concert was held in 2008 at New York's Highline Ballroom,featuring Shaynee and Russ' charts for his trombone band, with Russ there to conduct. Upon meeting Russ after the concert, we had a few minutes together. What seemed to matter most to Russ as we spoke was that I had enjoyed the arrangements.

When I told him I did but was distracted, Russ seemed taken aback momentarily. Then I told him I couldn't decide which was more fascinating—the orchestrations or his remarkable style of conducting, which was a throwback to the studios of the '50s. That's when I saw the famous twinkle in Russ' eye, the twinkle that always betrayed how he really felt about jazz, swing and big bands.

I'm going to miss those emails from “Uncle Russ."

JazzWax tracks: Russ Garcia arranged and conducted many superb albums in the '50s, many of which are available on CD. Here are my favorites: