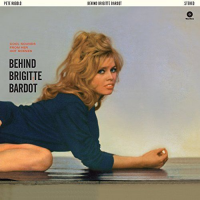 slideshow
When I posted last on Pete Rugolo (here), I left out two major albums in my survey of the arranger's work in a leadership role. They are Rugolo Plays Kenton (1958) and Behind Brigitte Bardot (1959). Both are exceptional for different reasons. Rugolo, of course, began arranging for Stan Kenton in 1944, starting with Opus a Dollar Three Eighty. As the years rolled on with Kenton, he arranged many of vocalist June Christy's numbers with the band as well as major instrumental works, including Machito, Collaboration, Elegy for Alto, Unison Riff, Minor Riff, Lover and Interlude (all 1947) as well as Love for Sale, Laura, Theme for Alto and Nat King Cole's Orange Colored Sky (all 1950).

Rugolo during this period became an early developer of jazz-classical and its highest-profile champion. The late Mercury producer Jack Tracy made this point in his liner notes to a re-issue of Rugolo Plays Kenton: “Another open- minded arranger of modern jazz, Bill Russo, said in 1963: 'Without a doubt, Pete Rugolo was the initiator of third stream jazz. He was one of the first men to apply an extensive symphonic or non-jazz compositional technique to the jazz orchestra."

On Rugolo Plays Kenton, the arranger updates the Kenton sound for the high-fidelity age, giving it an even more expansive wall-of-sound feel. In 1958, Rugolo's approach to Kenton's music was less like hitting a heavy bag and more like the sound of a 12-cylinder automatic-transmission accelerating—smooth and strong. Eager Beaver (dig Bob Cooper's oboe mixed in), Painted Rhythm (with two flutes together), Opus in Pastels (with tympani drums) and Capitol Punishment (recorded for this session) are spectacular arrangements and a superb tribute to the heart of what made Kenton spectacular—coy cacophony and supersized ambition. The music on Rugolo Plays Kenton feels as if it has moved out of the old city and into newly built suburbs, much the way Frank Sinatra's Capitol recordings had that updated, swinging feel.

Despite its cheesy, sexist name, Behind Brigitte Bardot remains a brilliant concept. Rugolo took many of the songs from movies in which the French actress appeared and gave them a hip score. A T'aimer from Love Is My Profession, L'Etang from Sans Famile and Manina Theme (From Girl in the Bikini) are gorgeous movie-music arrangements with a cool, pre-Henry Mancini feel. This is an album you just put on and let it play from start to finish. It's probably Rugolo's least known and least celebrated album, but it's among his finest.

Whether it was celebrating Kenton by topping many of his own arrangements or scoring the most elegant movie music in a loving tribute to Bardot, Rugolo was really something. Both of these albums are superior without sounding the least bit dated. Two albums I'll have to pack for my next trip to L.A. to give them the driving test.