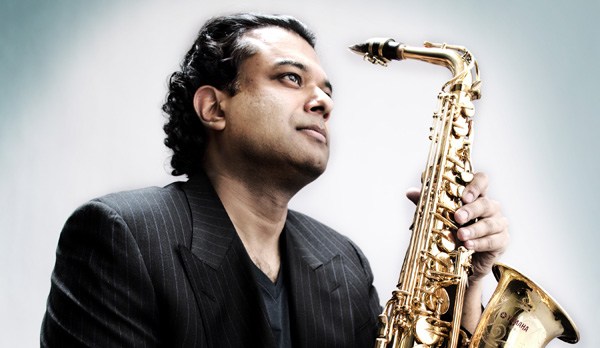 slideshow
Rudresh Mahanthappa and Bunky Green are alto saxophonists born 36 years apart. The younger, Mr. Mahanthappa, matured in the 1990s in New York after studying at Berklee College of Music. Mr. Green played in clubs as a teenager in Milwaukee in the early 1950s, when jazz was still a vernacular language, then went on to New York and Chicago, working with Charles Mingus and Sonny Stitt.

But at times during the late set at the Jazz Standard on Tuesday, in a new band they call Apex, they seemed as if they had the same parents. They improvised in bracing, rapid, babbling phrasing with unusual intervals, laying them into long but flowing meter; they both applied their own variations to Charlie Parker's bright and bursting tone, as well as to his rhythmic feeling.

The rhythm section gave them a clean track and a push, with the drummer Damion Reid and the bassist Francois Moutin articulating the microscopically complex beats, and the pianist Jason Moran using block chords and his sustain pedal to stratify and amplify parts of the themes. It was rarefied and full of gusto, a kind of high-modernist onslaught.

Small bands with two alto saxophones are uncommon. But so are bands that can triumph the first time theyre in front of an audience, which was the case on Tuesday with Apex.

Heres how that happened.

The two saxophonists planned a collaborative album for the Pi record label. Then they booked a gig before the recording. The band rehearsed last week with Mr. Moran and Mr. Reid. (Mr. Moran has recorded once before with Mr. Green.) The intended bassist, Mr. Moutin, had been stuck in France, immobilized by ash clouds, arriving only on Monday after catching one of the few flights from Europe to New York. But he wasnt completely unprepared when he got to the stage: last year, with the two principals but an otherwise different band, Mr. Moutin had played some of this music. Sight reading and a hungry, articulate style took care of the rest.