Roy Ayers at The Addition 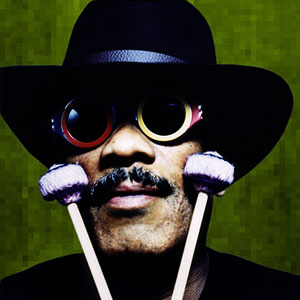 The Addition, formally known as Yoshi's San Francisco, welcomed the celebrated and ageless acid jazz/funk vibraphonist Roy Ayers for a weekend stand on November 21, 2014. The new name was inspired by the club's location between Lower Fillmore and the Western Addition. The show kicked off the soft opening of the City's latest music venue.

According to his official website, the respected and heavily sampled vibraphonist/vocalist is considered the “The Godfather of Neo Soul." Vocalist John Priestly proudly stated Ayers has been... “Sampled by many but never duplicated." The impressive and extensive list of artists who had incorporated Ayer's music in their hits included Mary J Blige, Mos Def, PM Dawn, Bjork, Common, Erykah Badu, Seu Jorge and tons of others. He has been one of the most sampled artists in music history.

Ayers started off the evening's first session with “I Wanna Touch You Baby" and folks in the house erupted with unabashed enthusiasm. Throughout the set, people were prancing at their tables and in the aisles. Everyone was having a fantastic time enjoying the soothing jazzy groove of Ayers and his talented band.

The super mellow “Everybody Loves The Sunshine “ had fans immediately dancing and screaming with delight at the opening notes. This sensational song was the title track from Roy Ayers Ubiquity 's 1976 smash album of the same name that hit number 6 on the jazz album charts, and was a top ten hit on the R&B charts. Overall, it peaked at the 51 spot on the US charts. This signature composition was delivered with the same vitality and spirit I remembered from those early days. When I hear this singular song, I'm reminded of fun summer parties on those warm LA beaches. Closing in on an energetic 75 years, Ayers demonstrated the vigor and sparkle of a wise and impish young man on stage.

Besides the melodic “Searchin,'" also from the fine Everybody Loves The Sunshine album, the distinguished vibraphone artist performed songs from his 2011 release King Of The Vibes. The set also included punk funk master Rick James' “Give It To Me Baby." Jamal Peoples complemented Ayers on keyboards.

Los Angeles native Ayers talked about working with noted jazz flutist Herbie Mann during 1966 in New York and meeting the iconic Miles Davis. He admired Davis and wanted to play with him. He said he “just didn't get the call “ from the bandleader. However he had high praise for his friend and renowned trumpeter.

Ayers and his daughter added up the albums over his illustrious career and they totaled 87 records and over 6,500 songs. He said he will be making music right up to the end. His current album is on CD and he has a vinyl record. Priestly said you can buy the record and Ayers would sign it to “authenticate it." Also... “you can have Roy Ayers in your home for generations."

Berkeley keyboardist Rodney Franklin sat in on the classic blues song “Bags Groove." Ayers said, “Everybody digs the blues and if you don't, something is wrong with you." Drummer Larry Peoples, Jamal's brother, powered through the song and the show with rock solid work. BassistDonald Nicks showed his skill with some cold funky licks. The two musicians formed a tight soulful rhythm section.

Young Ayers was inspired at age five when he first met the great vibraphonist Lionel Hampton at a concert and received a set of mallets from the famous musician. As a gifted teenaged multi instrumentalist, he later studied with the young vibraphonist Bobby Hutcherson who lived in his neighborhood.

During the robust show, percussionist Priestly passed out a tambourine and a cowbell to fans for real audience participation. The Ayers band packed a lot of his earlier and newer music into the opening set. After the break, he took center stage and fired up the night cap with that same verve without pause. It was a wondrous display of musical passion.

Roy Ayers is an authentic American original whose unique smooth jazz funk groove is unmistakable, and his five decades of musical brilliance are a tribute to his artistry and spirit. With his music sampled by dozens of singers and musicians, his pioneering sound and career will be ubiquitous for generations to come.