SOURCE: JAZZWAX BY MARC MYERS
May 9, 2011
Sign in to view read count 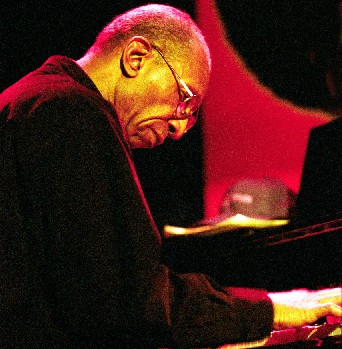 slideshow
Ronnie Mathews is barely known today, but the pianist was a distinguished sideman starting in 1960 and a leader through the years. As a sideman, he appeared on Freddie Hubbard's Breaking Point (1964), Lee Morgan's Rumproller (1965) Max Roach's Drums Unlimited (1965) and Dexter Gordon's The Homecoming (1976), as well as on albums by many leading jazz stars. As a leader, one of Mathews' finest albums was—Doin' the Thang!, recorded for Prestige in December 1963.

This album is not to be confused with Horace Silver's Doin' the Thing, recorded live at the Village Gate in 1961 for Blue Note. One of the tracks on Mathews' Prestige album is called The Thang, obviously leading a less than imaginative producer to piggyback on the Silver title. In fact, Mathews and Silver had little in common stylistically. Where Silver was percussive and arch, Mathews was a graceful chord voicer and line-runner, like Sonny Clark.

So why is Doin' the Thang! so special? Five reasons...

First, Freddie Hubbard is on here, and he's absolutely stellar. Hubbard had already made a name for himself on quite a few monumental albums, including John Coltrane's The Believer, Africa/Brass and Ole, Oliver Nelson's Blues and the Abstract Truth, Dexter Gordon's Doin' Alright and Bill Evans' Interplay.

Hubbard by late 1963 also had recorded quite a few dominant leadership dates under his belt, including Open Sesame, Goin' Up, Hub Cap, Groovy!, Ready for Freddie, Hub-Tones, The Artistry of Freddie Hubbard, Here to Stay and The Body and the Soul.

On Doin' the Thang!, Hubbard is positively brilliant, bringing along the innovation and fire he was employing in Art Blakey's Jazz Messengers at the time. When this album was recorded, Hubbard was between Blakey's Ugetsu and Free for All. I'll go so far as to say that Doin' the Thang! may be Hubbard's finest little-known date. You may not have known it existed until now.

Second, the album includes little-known baritone saxophonist Charles Davis [pictured, on tenor], who recorded with Sun Ra and Dinah Washington in the late 1950s before working with Kenny Dorham, Hubbard and Silver leading up to Doin' the Thang! Davis also contributed one of the album's hard bop tunes, 1239-A. Davis is still on the scene in New York today, teaching at the New School and recording.

Third, drummer Albert “Tootie" Heath adds enormous drive to this hard bop quintet, but without the Blakey bombast. So what you have are subtle, inventive drum figures, which leave space for you to hear Mathews. Today, Heath is still going strong, playing and recording with his brother Jimmy.

Fourth, you get to experience four of Mathews' originals—The Thang, Ichi Ban, The Orient and the effervescent Let's Get Down. Each one is devilishly melodic and complex as hard bop arrangements go.

Fifth, Mathews' treatment of Duke Ellington's Prelude to a Kiss (with the horns out) is hugely impressive. The album would be worth buying for this track alone. Mathews' risk-taking on the voicings and improvisational lines are lush and ambitious—in both 3/4 and 4/4 time.

Ronnie Mathews died in 2008 (his New York Times obit is here). As Doin' the Thang! shows, he was much more than a sideman. Unfortunately, he came of age about five years too late, when jazz leadership sessions were fewer in number and the lion's share went to already established legends. He would have to wait until late in his career for that shot. Mathews, as you will hear on Doin' the Thang!, was much more than ordinary.

JazzWax tracks: Doin' the Thang! has not been reissued as a stand-alone album by Concord, which owns Prestige. But the album's tracks are here on the first half of this Prestige two-fer CD from 2002. It's paired with saxophonist Roland Alexander's Pleasure Bent (with Mathews on piano). You'll find a few Japanese imports of Doin' the Thang! at eBay (I saw one last night for $12.99).

JazzWax clip: So, how good is this album? Here's Ronnie Mathews' lead-off track, The Thang...

Here's Mathews' last performance, on May 4, 2008 at Brooklyn Hospital while being treated for pancreatic cancer. He would die about eight weeks later on June 28.

I am so grateful someone taped him here playing Barry Harris' Nascimento. Harris appears to be there in the room visiting him. The sheer poetry and spirit of this clip choked me up...