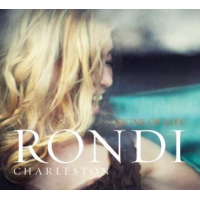 
Critically lauded vocalist, songwriter and lyricist Rondi Charleston brings her All Star Band to Catalina Jazz Club in Los Angeles for one show only, on Wednesday, June 12, 2013.

JazzTimes writes, “The remarkable Signs of Life fully reveals that Charleston is a songwriter whose poetic, narrative and compositional skills are comparable to such moderns masters as Joni Mitchell and Paul Simon.” The New York Times calls her “utterly delightful,” and Signs of Life soared to #5 on NY Daily News’ Top Ten New Releases upon its release.

With “some of the most memorable new songs to come from a jazz singer since Abbey Lincoln” (Hot House), her “incisive storytelling” (Jazz Police) on Signs of Life features a bonus track, “The Cave Knows,” (listen here) crafted by Charleston with renowned keyboardist Fred Hersch and featured in the feature film No Place on Earth, winner of the prestigious Toronto International Film Festival Award and currently in wide release.

A native of Chicago's Hyde Park, Rondi Charleston grew up in a home filled with music - her father was an English professor and jazz enthusiast, while her mother sang and taught voice. At age six, Rondi met the legendary Duke Ellington and knew instinctively that music would be a major part of her life. After graduating from Juilliard with a BM and MM in music, she studied journalism at NYU, then worked as a producer with Diane Sawyer at ABC's Prime Time Live, contributing to stories that won Rondi Emmy and Peabody Awards.

Rondi's training as a journalist strengthened her storytelling skills, something with which her audiences and critics continue to connect enthusiastically. With “Honesty, passion and a genuine sense of musical integrity run through what is arguably Rondi Charleston's most successful release to date” (Critical Jazz), she has integrated her journalistic and musical skills and emerged as a gifted storyteller of indelibly poignant and authentic themes drawn from her own real life experiences, which reverberate with wide and diverse audiences. Downbeat Magazine raves “Rondi Charleston is one of those rare artists for whom a song's meaning is as important as its melody. Her personal, thought-provoking, original songs slow the heartbeat and raise the mental senses with a documentarian acuity."