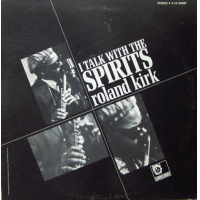 slideshow
On Sept. 16 and 17, 1964. Roland Kirk recorded tracks for an important album for Mercury called I Talk With the Spirits. It's important because of its instrumental eclecticism, its spiritual qualities and its original compositions by Kirk and playing by the group. The music holds up gloriously. It's independent-minded, it's melodic and it's soulful.

Last week I learned that that “Miss. C.J. Albert"—Crystal Joy-Albert—is a JazzWax reader. We emailed and I asked her a few questions about the session. Here's what she wrote back:

“Well, after a hectic career around the cabaret scene in New York City as a singing pianist at the Toast, Smalls Paradise, the Tender Trap and other clubs as well as a recording session for Steve Allen plus his TV show and a few others in Los Angeles, I married a brilliant Viennese pianist named Charles Albert. He played at La Cave, Henri IV, Huttons Murray Hill, the Viennese Lantern, La Chansonette and the Regency cocktail lounge to name a few.

After we married, we moved into a new apartment building on East 7th Street and Tompkins Square Park. It was a gem, and soon other musicians and jazz-club patrons discovered it. At one time, in addition to Roland (pre-Rahsaan) and his wife, Edith, residents included Albert “Tootie" Heath, Ted Curson, and lesser-known artists. In addition, a young crowd moved in so there was a club-like atmosphere in the building.

“You could hear practicing on various instruments all day, and that's how Roland and I got together. We lived next door to each other on the second floor and could hear each other's music all day. He heard something in my voice that translated into the sound of his flute. Edith Kirk had been urging him to make a flute album. She felt his playing was outstanding on that instrument and called for a feature album.

“The timing was perfect. I had stopped taking night gigs and was enjoying domesticity, so this was a chance to do a little something without a big commitment. We ran over the tunes a little at home and then went into the studio along with his Vibration Society sidemen (all of us had some small instrument, kazoos, etc.).

“Bobby Scott (above), an old friend, was the A&R guy on the album [producer] and got the flavor right away. It was an easy session, as I recall, not many takes. Roland and I argued about who was out of tune on one note. It was probably me, but that was the running joke.

“I used my married name then. I was determined to be a housewife at that time. The business end of my career was devastating. We eventually moved to New Jersey, Roland and Edith (above) moved to West End Ave. and eventually to East Orange N.J. We remained friends until their passing. Their son, Rory, and I still are close.

“I believe the session was done in the afternoon. I no longer own the album. Light-fingered friends have taken most of my collectibles, sigh. Thank goodness for YouTube!"

JazzWax clips: Here's I Talk With the Spirits...

And here's Serenade to a Cuckoo...