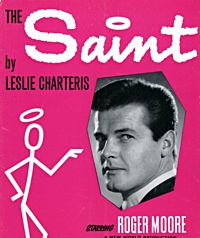 slideshow
Roger Moore, who played a dashing secret agent in TV's The Saint and in seven James Bond films, died on May 23, 2017. He was 89.

Though Roger wasn't a jazz musician and had nothing to do with music (the point of this blog), I had an opportunity to interview him for one of my Wall Street Journal “Playlist" columns. When I called Roger in late 2014 to do the interview, he was living (naturally) in Monaco. Just saying Monaco makes me think of the sound of poker chips and baccarat dice tumbling softly on violet felt.

A couple of music clips before we start. Here's the opening theme to The Saint...

During our interview, Roger was charming and a gentleman with a Bond-ian sense of humor, even at age 87. We spoke briefly about his films. Then he told me his favorite song and why it was special:

Frank Sinatra’s “One for My Baby" touches me deeply because I’ve actually been in bars with Frank having one more for the road.

Frank was a dear friend—I used to spend Easters and Thanksgivings at his home in Palm Springs, Calif. I’ve seen him sing One for My Baby several times, and he always treated it like a three-act play. All of the lyrics are from the perspective of the drinker—with an introduction, a main part and a wrap-up. You never actually learn any specifics about the fellow’s woes, which I suppose is part of the song’s genius.

Since the fellow has no one to talk to, the lyrics are directed at the barman. “So, set ’em up, Joe, I got a little story I think you should know / We’re drinkin’, my friend, to the end of a brief episode.” Quite honestly, I’ve never been in that situation. When I came out of the Army at age 21, I couldn’t afford to drink in bars for seven years.

I didn’t even get to order James Bond’s martini in the movies. The female leads order it for me. Director Guy Hamilton wanted to have me avoid all things associated with Sean Connery’s character.

But I have been in bars with Frank. In early September 1971, I was having a drink alone at a bar in New York when Frank arrived with a group of people. A witty friend of ours had died a few days earlier—Bennett Cerf, one of the founders of Random House—and then word came that Mike Romanoff, another friend and a Beverly Hills restaurateur, had died hours earlier.

Frank I and knew each other from Hollywood, and he called me over. We had Jack Daniel’s on the rocks and reflected on two lost friends. At one point Frank said, “I’ve got to get younger friends—I can’t take it when older friends die.”

I remember looking at him at that moment and thinking how much he seemed like the character in his song: “So, make it one for my baby and one more for the road / That long, long road.”

Roger Moore was a good guy.