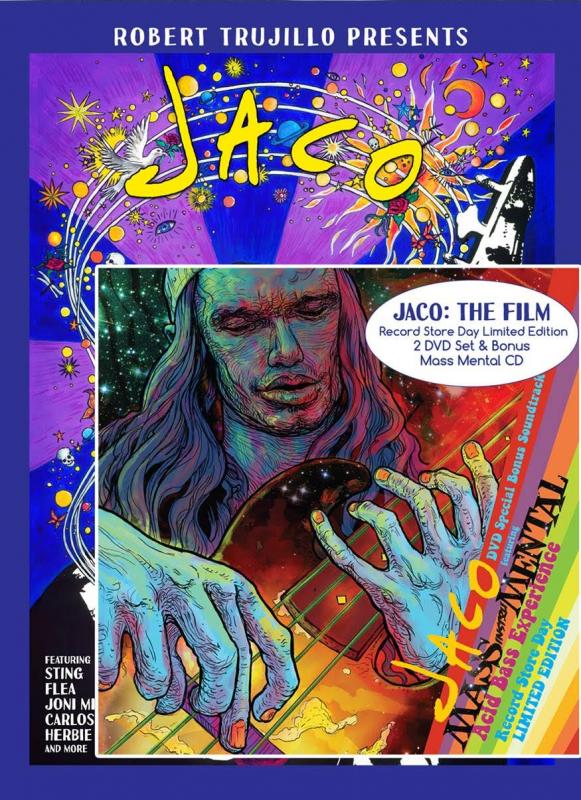 Robert Trujillo, in association with Passion Pictures, has announced the official multi-platform release of the acclaimed new documentary, JACO. The film chronicles the brief but extraordinary life of the great American musician/composer Jaco Pastorius. JACO's official DVD/Blu-ray release day will be on Black Friday November 27th, 2015. Independent record stores will have an exclusive, limited edition version of the DVD packaged with a bonus CD of music from the film, interspersed with Jaco’s voice for transition, and a track from Trujillo’s Mass Mental project.

Trujillo—world-renowned bassist with Metallica and the film's Executive Producer—will celebrate JACO and Record Store Day Black Friday 2015 with a special in-store signing at The Sound Garden in Syracuse, NY. Later that evening, following an introduction by Trujillo, The Syracuse International Film Festival will screens JACO at the Palace Theater For details, please go here.

“RSD has been a huge blessing, what a great passion driven tribe, the Sound Garden record shops have been so helpful, and supportive over the past couple years. I'm excited and pleased that Sound Garden Syracuse has embraced our documentary film JACO. I can't think of a better way to celebrate the domestic release of JACO on Black Friday November 27. For nearly 6 years, there hasn't been a minute I don't think about my biggest musical influence Jaco Pastorius, (and this project) I look forward to being surrounded by that Sound Garden energy of incredible music, and great people." —Robert Trujillo

“When I was in college I went to see Weather Report in Chapel Hill, NC. At the time I carried around an 8mm camera to capture the moments, much like people do today with smart phones. With my 8mm camera I caught Jaco at his grandest, strutting the stage, the master of his instrument, his art and of jazz. This 40 year old 8mm film led to a friendship with Robert and RSD’s involvement with the film. I’m excited that Robert’s film JACO is coming out for all to see.” —Michael Kurtz, co-founder of Record Store Day

JACO has since earned applause at a number of major festivals, including the inaugural Asbury Park Music in Film Festival and the Montreal International Jazz Festival. The film “(captures) the essence of what made Jaco such an influential artist," declared the Montreal Gazette, praising “the glowing words of Marchand's interviewees and the many recorded and live musical excerpts that he lets speak for themselves" and hailing JACO as “an enlightening introduction to a groundbreaking musician."

JACO tells the remarkable and tragic tale of Jaco Pastorius, a self-taught, larger-than-life musician who single-handedly changed the course of modern music by redefining the sound and the role of the electric bass guitar. Never-before-seen 8mm film, photographs, and audio recordings unveil the true story behind Pastorius' all-too-brief life, his music, and heartbreaking end.

JACO follows Pastorius' beginnings and ascent, from his era-defining work with jazz-fusion pioneers Weather Report to crossover collaborations with Joni Mitchell and Ian Hunter to his own inspired solo career as bandleader and composer. Highlighted by exclusive material from the Pastorius family archive, the film features memories and encomiums from a spectrum of Jaco fans and followers, including Joni Mitchell, Sting, Flea, Herbie Hancock, Geddy Lee, Bootsy Collins, Carlos Santana, Wayne Shorter, and many others. JACO is produced by Robert Trujillo in association with Passion Pictures (SEARCHING FOR SUGAR MAN, PROJECT NIM); the film is directed by Mr. Paul Marchand and Stephen Kijak.

Record Store Day, the organization, is managed by the Department of Record Stores and is organized in partnership with the Alliance of Independent Media Stores (AIMS), the Coalition of Independent Music Stores (CIMS) and celebrates the culture of independent record stores year- round with events and promotions.