SOURCE: ALL ABOUT JAZZ PUBLICITY
June 28, 2008
Sign in to view read count 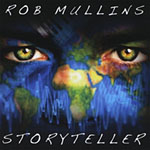 Rob Mullins has built his musical reputation in the world with a solid string of releases in the contemporary jazz field over the past fifteen years. His rise to international acclaim as a composer and performer began with his “Soulscape" project, which earned him a Grammy Nomination for composition. Since that time, Rob has gone on to record 12 CD's of his music, three of which went Billboard Top Ten. Starting out on drums at age 11, Rob became a touring professional with a California Big Band by age 12, doing his 6th grade homework on a tour bus. A car crash at 14 (he was a pedestrian) forced a musical switch to the piano. During this time Rob also mastered the saxophone, bass, percussion, and guitar. At 16, Rob began composing, arranging, and formed his first band. After attending the University of Northern Colorado on a percussion scholarship, Rob studied theory and composition from George Russell in New York on a National Endowment for the Arts Grant. The release of his “Soulscape" project brought him back to California where he is now an in demand composer, arranger, producer and session musician.

As a composer, Rob has penned over 400 songs-including top ten radio hits for Eric Marienthal, Ronnie Laws, and Wilton Felder. His production of “Tell It Like It Is" for Bobby Caldwell went to 17 on the Pop Charts and he has received a Grammy Nomination for Jazz Composition.

As a studio keyboardist and midi programmer, Rob's work can be heard on television each week on “The Proud Family" (Disney), “Soulfood" (Showtime) “Moesha" (UPN), “King of Queens" (CBS), Sister Sister" (WB), “Cousin Skeeter" (Nickelodeon), and “The Parkers" (UPN). Music from his large catalog of published songs can be heard on General Hospital, The Emmys, CBS News This Morning, NFL Sports, Extra! The Entertainment Magazine, E! True Hollywood Story, and Talk Soup.

As an event host, Rob has hosted the annual Jazz Concert for the Boys and Girls Clubs of America for which he received a Congressional Award for Public Service.

As a Radio Personality, Rob appeared for two years on Japanese radio broadcasts for FM Tokyo as the Hollywood Reporter. As an educator, Rob is a sought after private teacher in Los Angeles, and has taught workshops on various music topics in Los Angeles, Moscow, New York and Japan.

Current projects in 2008 include the promotion of his 17th album STORYTELLER and live appearances to support the album release.