SOURCE: JAZZWAX BY MARC MYERS
May 4, 2010
Sign in to view read count 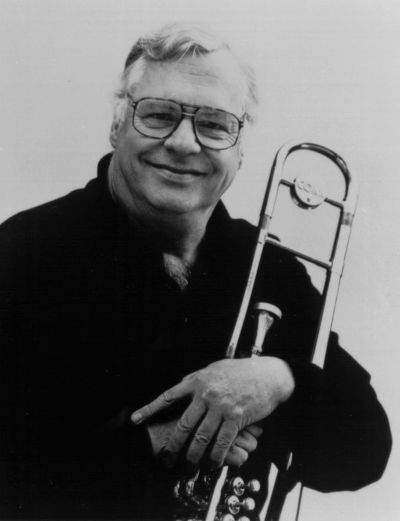 slideshow
Rob McConnell, a revered Canadian bandleader, valve trombonist, arranger and composer whose swinging versions of standards raised him to near cult status among his many global fans, died May 1st in Toronto. He was 75.

In an age when many big bands are viewed today as uneven relics, McConnell's crisp arrangements and straight-shooter stage presence helped him build a significant following. Part of McConnell's success was his ability to stand still and deliver what fans wanted. By clinging to a brass-centric sound made famous in the 1960s, the McConnell band was able to wait out the demise of its competition.

McConnell's arranging style was always deceptive. To the uninitiated, his renditions of Tin Pan Alley tunes and jazz standards often were misconstrued as “Canadian Pops." But to the careful listener, McConnell's music revealed intricate and sophisticated patterns and passages--all wrapped in a swinging tempo. Deep down, McConnell remained a life-long fan of the dance band--the type that was popular on college campuses in the very late 1950s.

McConnell's stylistic approach was a blending of several major influences. In a typical McConnell arrangement, one hears the powdery elegance of Claude Thornhill, the brassy bickering of Gil Evans and the sectional swagger of Stan Kenton. There also is a dash of Les and Larry Elgart, whose bands also specialized in straightforward but smartly arranged versions of well-known tunes.

But the essence of McConnell's orchestral sound also owe a debt to the flamboyance of Maynard Ferguson's early 1960s bands and the finger-snapping arranging style of Sammy Nestico in the 1970s. In McConnell's hands, a song was sure to receive a clearly articulated interpretation, with an emphasis on the brass section.

Unlike many Canadian musicians, McConnell remained in Canada, even after a recording opportunity in New York with Maynard Ferguson in 1964. His decision not to relocate to Hollywood or New York was always remembered and admired by Canadians, who for years watched their nation's most talented artists leave for fame-building and moneymaking opportunities in the U.S.

McConnell grew up in London, and played with several Canadian bands before forming the Boss Brass in 1968. At first, the band did not feature saxophones, preferring instead to emphasize the power and excitement of the trumpet and trombone sections. But by 1971, the need for reeds as a sound softener was apparent, and McConnell added a sax section. In 1976, McConnell's band included 22 musicians.

For the next 34 years, McConnell's band turned out a steady lineup of big band albums, receiving a Grammy Award in 1984 for All in Good Time. The band also toured extensively, particularly in Canada, where it often was regaled by more fans than there were seats. Back in late 2008, several JazzWax readers sent me emails hoping I could tell them how to get tickets to a sold-out Boss Brass appearance in Toronto sponsored by JazzFM.91.

I couldn't. Even the VIP seats were long gone.

JazzWax clip: Here's the Boss Brass in 1981 at Howard Rumsey's Concerts by the Sea...