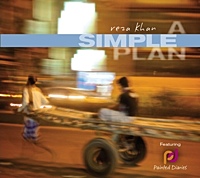 REZA KHAN AND PAINTED DIARIES ANNOUNCE THE LAUNCH OF THEIR NEW STUDIO RECORDING, A SIMPLE PLAN, AVAILABLE NOW ON THE PAINTED MEDIA LABEL

“It's like a nice walk on the beach with your family," says Reza Khan, speaking about his latest CD, A Simple Plan (on the Painted Media label). Following the 2009 release of Painted Diaries, a paean to the affecting stories of everyday life that “mostly disappear in peoples'diaries," Khan's restless artistry has turned inward now. A Simple Plan reawakens the special times in the artist's life, uncomplicated andfamiliar yet profound and inspirational, which he is happy to share, for he knows that his listeners, too, have lived these vignettes of time, feeling and spirit.

Every song on A Simple Plan is a soundscape distilling the universal loveliness of that day at the beach, the night by the fire, a walk inthe park, even the hours stuck in traffic and longing for home. From the first track, “Almost Home," to the last, “September Morning," A SimplePlan uses “catchy melodies, hooks and grooves" in a smooth and polished delivery to evoke those special, indelible times.

“Blue Dreams in Rio," for example, evokes not the blue of loss but of sitting at a café in Ipanema, a caipirinha frosty and redolent at thelips while gazing out at the surf.And “Back to the East" is a nostalgic reverie as Reza teases us with lines he could just as readily be playingon the sitar."Back to the East" asks us all to think about where we've come from.

Raised in Bangladesh where he was schooled in Indian classical music by his father, Reza has, since trading in his sitar for a guitar,integrated East with West. Reza's touch on the guitar is light yet definitive, not unlike that of the great sitar masters. At the same time,A Simple Plan is his most Western-friendly project to date.He has, with this CD, settled snugly into a smooth jazz groove after finding critics and marketers unsure as to where to shelve his music which boasts a number of world and genre influences.

With an extended stay in Southern Africa, Reza has lived most of his adult life in the States where he has joined a groundswell ofcontemporary South Asian jazz musicians—saxophonist Rudresh Mahanthappa and pianist Vijay Ayer come rushing to mind—who have hurtled themselves full throttle into jazz, endowing our most uniquely American idiom with the hallmarks of the East that these two sophisticated genres share: virtuosic playing, deep understanding of tone, and improvisation.

The side players he'd painstakingly searched for to complete Painted Diaries have remained, evolving into a tight-knit unit, one that jelledso well that, not only do they return for A Simple Plan, but Reza now calls his collective Reza Khan and the Painted Diaries. A number of theplayers have had a longer, earlier life with David Byrne.Smooth Jazz programming families will instantly recognize Andy Snitzer's collaborative contributions on Tenor and Alto Sax, as well as Graham Hawthorne's contribution to the tracks on drums and percussion. And two new members have come aboard for A Simple Plan: Viviane Arnoux has been stinging some of the top Afropop bands with her bumble bee accordion licks, and Jesse Kopansky's violin has been finely honed in Balkan and Middle Eastern melody.

A Simple Plan is a unique addition to the smooth jazz canon, intimate and accessible with its full share of masterly composing, arranging, execution. It's a perfect album to put your feet up to for arm-chair travel, to reminisce, or to plan for the future.

Reza Khan and Painted Diaries will be announcing their tour dates for the summer shortly.

Reza Khan, Andy Snitzer and Graham Hawthorne are all available for interviews through Knight Mediacom.