SOURCE: NOTES ON JAZZ BY RALPH A. MIRIELLO
August 7, 2010
Sign in to view read count 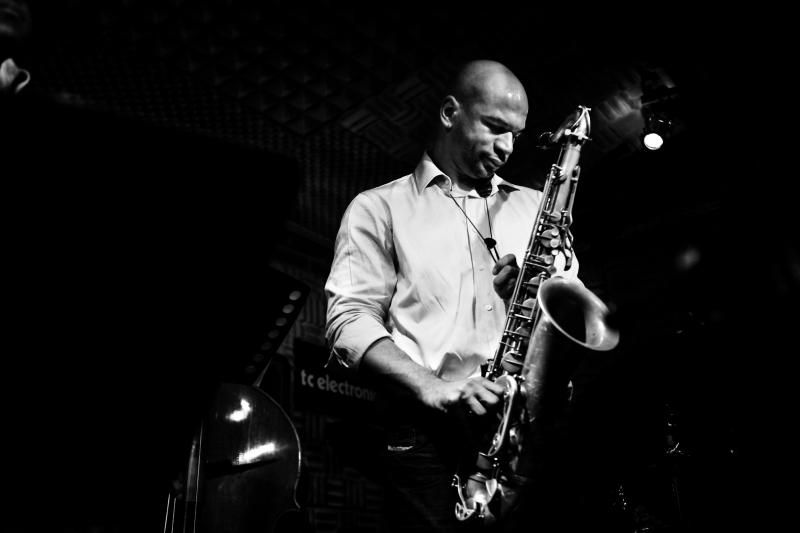 slideshow
The soon to be thirty, Walter Smith III is a maturing voice on tenor saxophone who seems to be at his best when in the accompaniment of a fine trumpet player. He has front lined with some notables including the prolific Terrence Blanchard, as well as the up and coming Christian Scott, and the fiery Sean Jones all with laudable results, but it is with the prodigious Ambrose Akinmusire where he seems to have found a true kindred spirit.

On “Live in Paris"

, Smith's second album as a leader, the interplay with Akinmusire is visceral and palpably energetic. This set was recorded in July of 2008 in the club Sunset-Sunside in Paris and subsequently was released in October 2009. Ben Ratliff of the New York Times did a favorable review back in March of this year (click here to read Ratliff's review). A friend recently turned me on to this powerful performance.

The opening salvo, “Blues" is an extended session on the blues with some fine individual moments On the introduction Smith delves deeply into a thoughtful solo exploration on his tenor. He has a strong, clear, deep-throated tone. He creates his own landscape of sounds, using a combination of slowly brewed tonal ideas that he intersperses with rapid crescendos of free flowing notes. He and Akinmusire take a brief but rousing duet at the head, showing a strong, unified symbiosis that has roots in some of the stellar sax/trumpet front lines of Art Blakey's Jazz Messengers but with a modern edge.

This band is a fully integrated unit that plays with the precision of a Swiss timepiece. Ambrose Akinmusire's trumpet is beautifully emotive on this cd. He employs soft, demurred passages, slickly slurred lines and poignant punctuations that show great sensitivity and impeccable timing. It is hard to say who spurs on whom on this frontline since both Smith and Akinmusire seem to be invigorated by each other's solo work.

The rhythm section is an essential part of this wonderful chemistry. Aaron Goldberg has a tremendous ear for picking up fragments of ideas from his fellow musicians and expanding on them. He uses these fleeting thoughts to prod both Smith and Akinmusire in a continuous flow of rapid-fire dialogue and as a source of inspiration for his own solo explorations.

An introductory solo by Matt Brewer aptly titled “Bass Solo" leads into the breezy “Aroca". Aaron Goldberg's solo work is particularly lyrical and moving as he dances with a light touch that has a crystalline quality at times. Smith takes this cue during his own thoughtful solo, undulating his way through the armature of the song like the gentle ebb and flow of an incoming tide. Akinmusire's solo is a model of restraint, deftly accompanied by Brewer and Marcus Gilmore's timely accents.

Another highlight is the group's take on Benny Golson's “Stablemates". The song's jagged lines offer the two frontline horns a chance to do a bit of a dance around each other before they each go solo. Akinmusire muses over Brewer's wandering bass lines. Smith takes flight with a fluid tenor solo before Goldberg adds a magical interlude that sets the stage for some wonderful conversational work between the three members of this potent rhythm section.

Goldberg starts the intoxicating sway of the rhythm on “Shed" on solo piano before the frontline play the exotic melody in unison. Smith is at his most sensual here using delicate slurs and sonorous screeches to accentuate the anguish he feels from the melody line. The inventive Goldberg takes you on his own journey maintaining the ostinato of the bass line with his left hand as his right hand flourishes off a series of unexpected sidebars. Akinmusire enters using thoughtful, measured phrases that glide across the melody, slowly building tension with ever increasing intensity in a sustained, controlled manner. He chooses not to use firebrand pyrotechnics on his trumpet (more Miles than Freddie) but is nonetheless very effective.

The final song of the set is Sam Rivers' “Cyclic Episode" which has become a staple of Smith's repertoire. The driving force of Brewer and Gilmore create the atmosphere where Goldberg, Smith and Akinmusire can shine during their individual solos. Smith is particularly flowing here with Gilmore spurring him on with timely crashes and rolls.

This is a top notch ensemble that has the magic of great chemistry on their side. Hopefully we will be able to hear more from them while the magic is still alive.