SOURCE: ALL ABOUT JAZZ PUBLICITY
June 3, 2008
Sign in to view read count 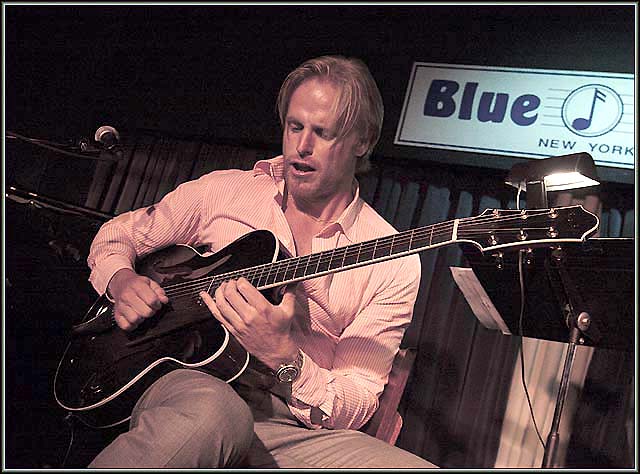 slideshow
Swedish jazz guitarist Andreas Oberg has been seizing increasing attention for his seamless blend of virtuosity and musicality in recent years. His career officially moves several notches upward and outward with the release of his first American album on April 8th, fittingly entitled My Favorite Guitars, on the new Resonance Records label. On its dozen luminously produced and improvisation-fueled tracks, Oberg pays tribute to many of his guitaristic inspirations, including Wes Montgomery, Django Reinhardt, Pat Metheny, George Benson, Pat Martino and Toninho Horta, while also demonstrating the distinctive Oberg touch and voice.

My Favorite Guitars confirms what many already know: Oberg is poised to become one of the prominent new voices on jazz guitar. At 29, he is a mature and graceful monster of a player who is well established on the Swedish and European scene and has been frequently traveling to the U.S. to play of late.

As it happened, it was initially through the portal of YouTube that the new album came to the attention of veteran producer-engineer George Klabin--who had been establishing his new Rising Jazz Stars Foundation and on the lookout for worthy new stars on the jazz horizon. Klabin espied a YouTube video of Oberg's and was immediately hooked. Klabin reached out and invited the guitarist to play a Rising Jazz Stars show and record this concept-driven album, enlisting veteran keyboardist/arranger Kuno Schmid, pianist Tamir Handelman, and other fine players to fill out the sound, on a song set both mainstream, packed with steamy soloing, and yet also accessibly melodic.

As Oberg explains, “the concept was to record songs by some of my favorite guitarists, but not to copy them--to do my version of their songs." While Oberg covers abundantly diverse stylistic ground on these tracks, he admits, “I play other stuff, too. I play pure Django Reinhardt music, too, but I don't do it on the album. I know many styles. I play rock and fusion, too. But jazz is what I like the most."

Oberg's love affair with the guitar, and with music, began as a youth in Stockholm, starting from a strong foundation of classical guitar and then discovering fusion guitarists such as Scott Henderson and Frank Gambale. He dug deeper into the mainstream jazz heroes and studied theory and arranging at Stockholm's respected Royal Music Academy. For the past decade, he has been a much-admired guitarist on the European jazz scene, and beyond.

That backdrop plays into the musical richness and versatility of his new recording, which is swinging, burning, soulful and Brazilian-flavored, by turns. While he has played in rock and fusion settings, on My Favorite Guitars, Oberg keeps things fat, warm and clean, tone-wise. “I have a lot of pedals and things," Oberg comments, “but I like to create as much as possible with just the clean guitar sound. So many guitarists are great, but they are so dependent on a certain pedal or a certain guitar. I'm more the kind of guy who can pick up any guitar."

The unaffected, clean-toned style in keeping with one of his very favorite players, George Benson, whose tune “The Changing World" Oberg includes on the album. “My favorite guitarist of all of them is George Benson, by far. He's got such a nice combination of qualities. Blues is the foundation for his playing, but he also has chops and interesting harmonic ideas. But it's all an extension of the blues. I like that." Oberg is one of several artists involved in the Rising Jazz Stars Foundation and its label arm, Resonance Records, an exciting new collaborative entity led by Klabin and jazz recording industry mainstay Ricky Schultz. As Klabin explains, the Foundation's guiding concept is to nurture the careers of emerging artists from an international pool of “tremendous number of musicians out there who never get an opportunity to be properly promoted. It's not just recording them, which is also important. What do you do with it? Do you just put it out, or do you promote it and do all the things that a real professional record company does, so that's what we're trying to do."

“This is about helping lesser-known artists, but only the very cream of the crop. We cannot help people who are not at the top level. We choose a very small number from a huge list of deserving people. I figured that I might as well use my own experience and I guess you could say my own taste. I want it to be mainstream only, and they have to have passion."

Passion pours forth naturally from Oberg's My Favorite Guitars, which Klabin points to as “an example of what we're trying to do and who we're working with. I think Andreas is poised to become one of the top jazz guitarists in the world. It's just a matter of time."

If jazz is his truest love, Oberg confesses that one of his goals is to “make music that can appeal to people who don't like jazz. I love to play a burning song--like some of the tracks on this CD--but I also like the ballads and the songs that are more contemporary. Some of the songs on the record could be played on the radio and anyone could appreciate them.

“I still want to play my solos and do my thing, but maybe even more in the future change the packaging, so the package could appeal to people in general, without doing it too cheesy, or being a sell-out." He adds, with a laugh, “It's kind of a thin line there."

With the release of his new album and advancing performance opportunities internationally, Oberg recognizes the auspiciousness of this moment in his musical career, and the ripe timing of his involvement in the Rising Jazz Stars Foundation venture. “This is a great opportunity," he says. “I'm really happy to be able to do what I love the most--to play music."