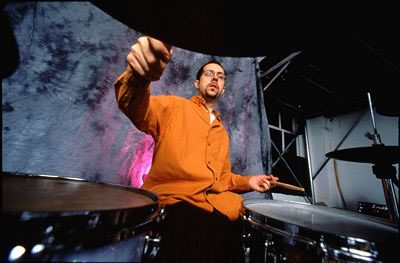 “John Hollenbeck has the power to induce synesthesia. A precociously gifted... composer, arranger, percussionist, and leader of several musical groups... Hollenbeck makes music that sounds the way the world looks and feels… Hollenbeck is a musician for our time.” &#151David Hadju, The New Republic

“John Hollenbeck is one of the most original and influential young jazz composers working today,” said Schaphorst. “His relationship with former NEC faculty member Bob Brookmeyer, both as a player and composer, makes John's hiring particularly appropriate and meaningful. I'm thrilled to have him working with our students next semester.”

Hollenbeck and his Claudia Quintet will also host a master class on Tuesday, September 23 from 6:30 – 8 p.m. at NEC’s Brown Hall. The event is free and open to the public. The Quintet plays the following night at the Lily Pad in Cambridge.

“NEC has impacted my life as a musician/composer quite significantly over the course of my life,” says Hollenbeck. “I had an unforgettable rehearsal with George Russell and his Living Time Orchestra in the basement underneath Jordan Hall when I was 18. Two years later I heard/saw Ken Schaphorst conduct The True Colors Big Band with incredible players that I would later meet and play with professionally. Moving to NYC, I quickly realized that most of the musicians I felt to be kindred spirits had studied at NEC. The faculty at NEC past and present is extraordinary and among them are several of my heroes: my brother Pat Hollenbeck, George Russell, Jimmy Guiffre, Vic Firth, Bob Moses and my musical father, Bob Brookmeyer. It is an absolute honor to have this opportunity to teach for a semester and be surrounded by the NEC legacy.”

Genre-crossing composer/percussionist John Hollenbeck, renowned in both the jazz and new-music worlds, has gained widespread recognition as the driving force behind the unclassifiable Claudia Quintet and the ambitious John Hollenbeck Large Ensemble, groups with roots in jazz, world music, and contemporary composition. He integrates his deep interest in contemporary composition and spiritual practice into a musical language that is as accessible and expressive as it is advanced. Hollenbeck received degrees in percussion and jazz composition from the Eastman School of Music before moving to New York City in the early 1990s. He quickly struck up relationships with some of the leading lights of jazz (Bob Brookmeyer, Fred Hersch, Tony Malaby, Kenny Wheeler) and new music (composer/choreographer Meredith Monk, for whose works “Magic Frequencies,” “Mercy,” and “The Impermanence Project” he composed and performed percussion scores).

Hollenbeck has earned four Grammy nominations: for both of his Large Ensemble albums “A Blessing" and “eternal interlude”; for his composition “Falling Men”, from the album “Shut Up and Dance”, commissioned by the Orchestre National de Jazz and funded in part by the Chamber Music America French-American Jazz Exchange grant; and for his arrangement of Jimmy Webb’s “The Moon’s a Harsh Mistress”, from the album “Songs I Like a Lot”, commissioned by the Frankfurt Radio Big Band. John’s most notable awards include a 2007 Guggenheim Fellowship, the 2010 ASCAP Jazz Vanguard Award, and a 2012 Doris Duke Performing Artist Award. His recent works include commissions by Bang on a Can All-Stars, Ethos Percussion Group, Youngstown State University, Gotham Wind Symphony, the University of Rochester, Melbourne Jazz Festival, Edinburgh Jazz Festival, and Ensemble Cairn. Since 2005, he has been a professor of Jazz Drums and Improvisation at the Jazz Institute Berlin.