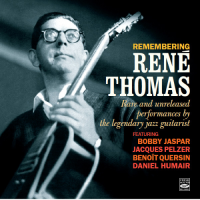 slideshow
Born in Liège, Belgium, guitarist René Thomas moved to Paris in the early 1950s and became part of the active jazz scene there. Paris back then was similar to 52nd Street in New York, where musicians could engage in steady gigging with leading musicians from Europe and from America. What most of the European jazz musicians in Paris had in common was a pronounced sense of melody, swing and beauty. Thomas had a way of picking that was instantly engaging.

All of Thomas's qualities are on display in Fresh Sound's recently released Remembering René Thomas: Rare and Unreleased Performances by the Legendary Jazz Guitarist. The two-CD set features a wide range of live and studio tracks between 1955 and 1962. Some were recorded in Brussels, some in Montreal and the rest in France. All are tasty and hip. Virtually all of the recordings are with French or Belgian musicians. Just one track, Blues, features Jimmy Smith on organ and Donald Bailey on drums.

A 1955 session includes alto saxophonist Jack Pelzer, whose cool school approach shows he had early exposure to Lee Konitz. Other standouts include group in 1961 and '62 with Bobby Jaspar on flute and others with Jaspar on tenor saxophone. Thomas's main influence was guitarist Jimmy Raney, who spent part of 1954 in Paris.

Among the off-beat tracks is a cover of John Coltrane's Blue Train, Miles Davis's Milestones (the one Davis recorded with Charlie Parker in 1947), two different takes of Jimmy Raney's Motion (which Raney first recorded on Jimmy Raney Plays with Stan Getz in 1953), Red Garland's All Mornin' Long, Thomas's I Remember Sonny, a terrific chord- heavy Our Delight, a jaunty version of Moonlight in Vermont and a skippy rendition of Stardust.

Thomas is among my five favorite guitarists, along with Wes Montgomery, Raney, Grant Green and Billy Bauer. If you dig him, too, this new album thoroughly satisfies. The set is worthwhile alone just for Jordi Pujol's excellent liner notes, which run 20 pages.