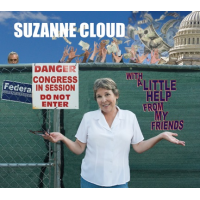 slideshow
It all started with an interview request by podcaster Jacob Haller asking Suzanne Cloud if he could talk to her about the tune “Below the Beltway” for his show “Tell Me About Your Song." It had been some time since she had heard it—she first recorded this song about money in politics in 1995—but after hearing the tune that she and guitarist Jef Lee Johnson wrote once again, Cloud decided that the feeling behind the tune was even more relevant now than when she had recorded it. The Supreme Court had recently let the money dogs loose with the Citizens United decision, hadn't they? So Dreambox Media and Suzanne decided to re-release it with some extra musical goodies in the mix.

Added to the original CD: “Broadcast Snooze,” an original by Jim Miller and Cloud that skewers cable media using their own cynical jargon; “All the Fine Young Men,” an anti-war song from Down Under with some added lyrics by Cloud; and a live-in-studio recording of “Wrap Your Troubles in Dreams,” a Great Depression era song, with saxophonist Larry McKenna, pianist Jim Ridl, bassist Mike Boone, drummer Jim Miller, and vocals by Suzanne Cloud, smooth and lullaby-like.

This CD has the talent and intelligence of the late guitarist Jef Lee Johnson all over it. Without him, this CD would never have been the unique experience it surely is to the folks who knew him. Jef was never meant to “just play standards.” Oh no. His touching and gritty instrumental voice is on mostly every song on this CD, and this project is dedicated to him. He is greatly missed by his friends.

The CD is on sale at Dreambox Media and at CD Baby and all proceeds will go to Jazz Bridge, a nonprofit that aids Philadelphia-area professional jazz and blues musicians in crisis.

Original reviews for this project included:

Village Voice: “Suzanne Cloud... prefers to focus our attention on her brain rather than her voice. On her original, 'Below the Beltway,' she wittily juxtaposes the repetitious, singsong rhythms of political talk-speak with a jazz vocal and a funky backbeat.” —Will Friedwald

JazzTimes: “This is a vocalist I can listen to more than once, and she’s a clever lyricist too. I’m titillated by Suzanne Cloud’s sardonic slant on silicon sillies who have “Collagen Lips” ...Her helpful ‘Friends’ are too numerous to mention, but Suzanne Cloud’s voice is the most amazing instrument of all.” —Patricia Myers

The Philadelphia Inquirer: “…skewers talk radio, Kenny G and national politics in a way that is brash and even funny…Cloud’s work would stand out for its ambitious subjects alone…humorous and devastating... Cloud is definitely airborne.” —Karl Stark

Washington City Paper: “...a lively alternative to the usual…she’s one of jazz’s best kept secrets, a full-voiced, rhythmically assured singer equally sensitive to the musical and lyrical content of her repertoire. A smart, innovative CD...” —Joel E. Siegal

Her lyrics have a clever, inventive and humorous edge more often associated with folk singers, but she delivers them with some very swinging vocals, backed by 20 of Philadelphia's—her home town—best jazz musicians. Neither messages nor music are sacrificed.

Cloud and drummer sidekick Jim Miller line up their targets and let fly barbs of satire and outrage. Callous, right-wing exploitative talkback radio hosts are ridiculed and exposed in “Talk Radio". “Bolivia", written by pianist Cedar Walton, takes a swipe at First World tourists who trek through the Third World oblivious to the poverty and repression sponsored by their own governments.

“Watch the Skies" incredulously ponders the bizarre obsessions of the X-Files/Roswell/Star trek/Hale-Bopp era in the US, suggesting that distorted hopes for a better world by a deeply dissatisfied people are what fuels this mass psychosis.

In the bluesy and acerbic “Collagen Lips", Cloud makes fun of the insecurity industries: “Collagen lips, silicon boobs/ Lipo-sucked my hips and thighs/ Mint green contacts in my eyes/ Lashes dyed, my tummy's tucked/ Plastic pins hold up my butt/ Fixed all the flaws that never were there/ I'll never age/ My waist won't bend/ Because I'm your Barbie, baby, and you're my Ken."

“Hey Kenny, Gee", is a viciously sarcastic attack on the awful music served up by ratings-driven radio, with poor old Kenny G's pre-digested “smooth jazz" bearing the brunt. To such unappetizing pap, Cloud recommends three courses of the genius of Thelonius Monk in her homage, “A Lullaby, Dear Monk".

The most hard-hitting track must be “Below the Beltway", which whacks the dishonest and corrupt antics of reactionary US pollies: “Anomic pundits back the lies/ While I'm relaxing on my yacht/ All my constituents'll pay through the nose/ But I won't get caught/ A hundred thousand from a friend/ Another million for my vote/ The economics aren't seen very much/ 'Cause everyone accepts some help to get elected/ See, politics is status quo/ And ideology doesn't mean very much/ 'Cause everyone expects some help to get elected."

Cloud slyly overlays her lyrics with sound bites from the likes of Newt Gingrich, Bob Dole, Pat Buchanan, Californian Governor Pete Wilson and a couple of dozen other representatives who have all pocketed funds from the right-wing National Rifle Association.

Needless to say, With a Little Help From My Friends has not been released on a major label and is not available in the record chains. It is available in Australia only via mail order. But it is more than worth the trouble." —Norm Dixon