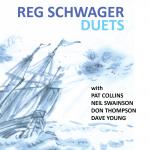 Reg Schwager is a four-time winner of Canada's National Jazz Award for Guitarist of the Year. From 1994-2004, Schwager toured and recorded with master jazz pianist George Shearing, and he has also worked with Diana Krall, Peter Appleyard, Rob McConnell, Kenny Wheeler and many others. He appears on over 100 commercially released recordings including, under his own name, “Resonance," “Border Town" and “Chromology." He appears as a co-leader with Don Thompson on the duo CDs “Live at Mezzetta" and “One Take, Volume Three."

“Duets" was recorded in a series of friendly, informal sessions at Schwager's home. The material covered includes originals by all of the musicians plus a handful of jazz standards. Several of the songs are tributes, including dedications to Sir George Shearing, Elis Regina and the Dutch writer Jan Jacob Slauerhoff.

The list of artists these four bassists have performed with is frighteningly long so what follows is just a short sample. Don Thompson is known for his work with Jim Hall, John Handy, Paul Desmond and Ed Bickert, among many others. Neil Swainson has worked with such artists as George Shearing, Woody Shaw and Joe Henderson. Dave Young was the bassist with Oscar Peterson for many years and has also played with Lenny Breau, Joe Pass and Cedar Walton. Pat Collins has worked with, among others, Dizzy Gillespie, Moe Koffman and Tal Farlow.

Peter Hum of the Ottawa Citizen, in a review of “Chromology," wrote, “I can't think of another Canadian jazz player who deserves more recognition abroad than Toronto guitarist Reg Schwager."

Glen Hall, reviewing “One Take" for Exclaim!, wrote, “A one-word summary of the playing on this disc: impeccable. The rapport between revered bassist Don Thompson and long-time playing partner guitarist Reg Schwager is so highly developed that even the most sophisticated lines and interplay are brought off with effortless grace."

Jerry D'Souza at All About Jazz wrote the following about “Live at Mezzetta": “One of the joys of listening to music is to come upon an album that crystallizes the essence of a song. Reg Schwager and Don Thompson bring that trait to a fulfillment that suffuses the soul with its warmth and elegant beauty."