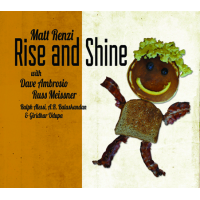 slideshow
For his eighth CD as a leader, Rise and Shine, the versatile reed player and composer Matt Renzi further solidifies his reputation as a unique innovator and deeply probing musical traveler. Heard here on tenor saxophone, flute, oboe, and clarinet, the Rome-based Renzi reunites with his longtime trio—bassist Dave Ambrosio and drummer Russ Meissner—who are joined by three intriguing guests. The new CD will be released January 14 by the Three P’s label.

“We’ve developed our language,” Renzi says of his trio-mates. “Once I explain the essence of a particular song, we let the music breathe and go where it wants to go in that particular moment, which takes a lot of trust musically.”

Sharing the frontline on three tracks on Rise and Shine is the acclaimed trumpeter Ralph Alessi, while South Indian masters Giridhar Udupa and A.R. Balaskandan contribute vocal percussion and mridangam respectively on the CD opener “Noasis,” an arresting swinger with its dancing, warm-toned tenor, double-stop bass figures, and exacting vocalisms. (Renzi studied Indian classical music with the brilliant improvising vocalist and composer R.A. Ramamani and has been studying Carnatic Rhythm on the kanjira, a South Indian frame drum, for many years now.) But even without the Indian accents, Renzi creates magnetic currents through his interaction with Ambrosio and Meissner.

The 41-year-old Renzi, a San Francisco native who lived, worked, and studied in New York, Boston, and India before relocating to Rome, performs throughout Europe as well as the United States, where he has strong followings in New York and on the West Coast. “During my time in Europe, I’ve matured as a composer,” he says. “Wherever I am, I’m continuously analyzing contemporary scores, experimenting with orchestration, and researching my new sounds. I’ve developed a lot as a performer as well.”

Matt Renzi is a third-generation musician. His father, Paul Renzi, was principal flutist for the San Francisco Symphony for 50 years (he retired in 2004). His grandfather, Paolo Renzi, was principal oboist with Arturo Toscanini’s legendary NBC Symphony Orchestra; his father also played with Toscanini. “I knew I wanted to play the saxophone when I was 12 or 13,” says Matt.

He studied for a time with Joe Henderson, who lived in the neighborhood and continued to be a friend and influence once their formal studies ended. Other mentors included his father, drummer Eddie Marshall, and bassist Herbie Lewis.

Renzi headed to Boston to pursue a degree in music performance at Berklee College of Music, then to New York, where he first connected with Ambrosio and Meissner. “Musically it was fantastic,” he recalls of the trio’s busy time on the jazz scene. “We did various tours of Japan as well as Europe and the U.S. together.”

Returning to the West Coast to acquire a master’s degree in arts in classical composition at San Francisco State, Renzi immersed himself in the compositions of 20th-century giants including Stravinsky and Elliott Carter. His studies there, he says, “got me away from using traditional chords to organizing more abstract sounds, and to thinking more in terms of orchestration.”

“Vetro,” the atmospheric final track on Rise and Shine, pairs Renzi’s oboe with lyrical modern percussion. “I plan to use the oboe more in improvisational settings,” he says. “These days, I use it in my cello quartet, in which I try to mix contemporary classical music with improvisation. I also play oboe on certain gigs I have as a sideman. It’s a technically and physically demanding instrument, so it makes you really think about every note you play.”

In addition to his work with the cello quartet, he performs a separate repertoire with a larger version of the band, Arm-Sized Legging, which features cello, viola, reeds, bass, and drums. He’s also working on a solo CD using saxophone, clarinet, and English horn and exploring texture, sound, and microtonality. “I would love to write a piece for orchestra and saxophone,” says Renzi. He also is continuing his studies of south Indian percussion to become even more fluent in that musical language.