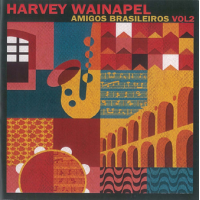 slideshow
Saxophonist and clarinetist Harvey Wainapel has been dividing his time between Berkeley and Brazil for nearly 15 years now, and in the course of his expansive Brazilian travels he’s forged deep musical friendships with an array of that country’s notable composers and instrumentalists. Many of them were showcased on Wainapel’s gorgeous 2007 travelogue Amigos Brasileiros, and many more are in the spotlight on its follow-up, Amigos Brasileiros Vol. 2. The new disc will be released by Wainapel’s JazzMission Records on September 2.

“I’ve been pretty ambitious with both of these CDs, but I’m still just scratching the surface,” Wainapel says. “There are so many traditions and styles that are very localized and not commercial, so you won’t hear them on the radio.”

In many ways Amigos Brasileiros Vol. 2 serves as a savvy on-the-ground survey of the contemporary Brazilian scene, a thoughtfully curated guide to musicians’ musicians in a nation bound together by sound. Instrumental music is overshadowed in Brazil by vocal music, which means many of the Amigos Brasileiros players and composers are unsung at home. “I wanted to reflect what’s happening now with the people I meet,” says Wainapel, “and they were kind enough to include me on their scene. There’s so much creative energy down there. You never get to the end of it.”

Equally adept on clarinets and saxophones, Wainapel (pronounced wine-apple) has also collaborated with some of jazz’s most acclaimed musicians over the past three decades, including pianists Kenny Barron and McCoy Tyner, tenor saxophonists Joe Henderson and Joe Lovano, and drummer Billy Hart. It was while living in New York City, in 1979, that he first contracted his fever for Brazilian music. He landed a weekly gig playing in a large Brazilian jazz ensemble led by Thiago de Melo, which also included drummer Duduka da Fonseca, Wainapel’s onetime Berklee classmate Claudio Roditi, and pianist Marcos Silva. The fever became an obsession.

“It’s led me to making these annual trips,” says the saxophonist, a native of upstate Ellenville, New York, “though I play jazz there too. Brazilians love jazz, so it’s 50/50. The Brazilian side injects a lot of emotion into my playing, and it opened up my concept of melody and harmony.” Wainapel has gone on to tour internationally with Airto Moreira and Flora Purim, and perform in the U.S. and Brazil with such top figures as composer Guinga, guitar virtuoso Paulo Bellinati, and master pianists Jovino Santos Neto and Nelson Ayres.

Wainapel relocated to the San Francisco Bay Area in 1982 and quickly became an in-demand player. He made his recording debut as a leader in 1994 with At Home/On the Road, followed by Ambrosia: The Music of Kenny Barron (1996) and The Hang (1998), with Barron at the piano. Wainapel’s first full recording of Brazilian music was 2004’s New Choros of Brazil, a duo album with guitarist Paulo Bellinati that focused on previously unrecorded choros by masters like Sérgio Assad, Guinga, and Dori Caymmi.

The saxophonist is planning a special series of shows to celebrate the release of Amigos Brasileiros Vol. 2. He’ll be appearing 9/4 at Kuumbwa, Santa Cruz, and 9/5 at the California Jazz Conservatory (formerly the Jazzschool), Berkeley, with special guests Vitor Gonçalves on piano (Hermeto Pascoal, Maria Bethânia, Anat Cohen) and Cleber Almeida on drums and percussion (Hamilton de Holanda, Banda Mantiqueira), plus bassist Scott Thompson and percussionist Brian Rice. He’ll also be performing as a duo with Gonçalves 9/10 at Sonoma State University (1-3 pm) and 9/12 at Old Siskiyou Barn, Ashland, Oregon.

Wainapel and carioca vocalist (and longtime California resident) Claudia Villela are scheduled to appear together at the Monterey Jazz Festival 9/19.

In October, Wainapel will head to the Northwest for additional CD release gigs with pianist and frequent collaborator Jovino Santos Neto and his group: 10/6 at Rhythm & Rye, Olympia (also featuring Filó Machado) and 10/7 The Royal Room, Seattle.

And then the saxophonist will pack his bags for another temporada in Brazil, staying for most of the remainder of 2014.