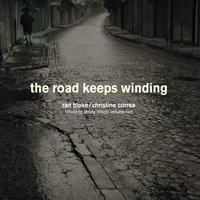 slideshow
The Road Keeps Winding, the second volume in their ongoing tribute to Abbey Lincoln

Brooklyn-based Red Piano Records is proud to announce the release of The Road Keeps Winding from pianist/composer Ran Blake and vocalist Christine Correa. This album represents the second volume in the duo's ongoing, respectful and creative tribute to the late, great Abbey Lincoln. In addition to paying tribute to Lincoln, The Road Keeps Winding is the latest yield from Blake and Correa's remarkable friendship and superlative musical collaboration that has thrived for more than three decades.

Blake and Correa are a united force in paying tribute to Abbey Lincoln. Correa is able to capture the unique timbre of Abbey's voice, yet still retain her own uniqueness. Together, they capture the raw emotion ("Love Lament") and abundant confidence of Abbey's delivery, and the drama of her demonstrative vocalizations (most notable on “The River" and “In The Red"). Blake's pianism on “Throw It Away" (perhaps made even more poignant as Blake plays it solo, sans vocals), which has possibly become Abbey's best-known composition, is sublime, passionate and fierce, much like Abbey Lincoln herself.

Abbey Lincoln holds a special place in the hearts and souls of these artists; a place where her music, her sound and her aesthetic, resonates resoundingly. Blake said, “The fact is that Abbey always spoke the truth, nothing but the truth, openly, unabashedly, honestly, unreservedly, and most importantly, with dignity and conviction. Abbey had raw anger ("Driva Man"/"Triptych"), immortal vision ("Down Here Below"—title track from Blake and Correa's first tribute to Lincoln, Down Here Below, also on Red Piano Records), passionate displays of the great American tragedy ("Retribution" and “In The Red"), and also addressed issues of memories lost and gained ("Throw It Away"). I listened to a lot of Abbey's music when I was a student at Bard College. I particularly liked the album Abbey is Blue, but was astounded when she and Max Roach brought out the Freedom Now Suite. Around late October 1960, Roach and his group were hired at The Jazz Gallery. The group which included Julian Priester, Booker Little, and a man who eventually became my teacher, Mal Waldron, performed at the club for five or six weeks. The entire Freedom Suite was performed, as was the entire material from the Straight Ahead album. Although Abbey didn't scat or improvise dramatically, there were nights when her lyrics were more pungent, others when they were more tragic. Often I would leave the club at 3:30 or 4:00 AM to catch the IRT Broadway line back home, trying to recreate in my head much of the material I had heard earlier that evening. The last time Abbey and I met was in February 2006 at Scullers. She came over to the table for a cognac, mentioning she had adopted a dog called Sako and had moved to Riverside Drive and then she publicly thanked me . . ."

Correa elaborated, “my first exposure to Abbey Lincoln was in 1979 through Ran Blake, almost as soon as I arrived in the U.S. I had never before listened to anything as intense as the Freedom Now Suite and Straight Ahead recordings. Abbey's delivery was passionate and expressive and she had a power all her own! Beginning with her association with Max Roach, her style and repertoire changed from a nightclub act ("The Heel"), featuring selections from the Great American Songbook to performing songs with a social context ("Freedom Now Suite", “Mendacity", “Straight Ahead"). Her later meditations on life and humanity showed yet another facet to this remarkable artist. Abbey's powerful voice had a lasting effect on me, and her music has continued to be a source of inspiration. It seems only fitting to record a second tribute album, as she was a presence, a great singer, musician, actress, poet and human being. For me this project with Ran is a dream come true."

In a career that now spans five decades, pianist Ran Blake has created a unique niche in improvised music as an artist and educator. With a characteristic mix of spontaneous solos, modern classical tonalities, the great American blues and gospel traditions and themes from classic Film Noir, Blake's singular sound has earned him a dedicated following across the world. In the tradition of two of his idols, Ellington and Monk, Blake has incorporated and synthesized several otherwise divergent styles and influences into a single innovative and cohesive style of his own, ranking him among the geniuses of the genre. Ran Blake is a recipient of the MacArthur “Genius" grant. He was the founder and long-time chairperson of the Third Stream Department (currently called Contemporary Improvisation Department) at New England Conservatory in Boston, MA.

Christine Correa has been involved in a variety of improvisational contexts and is currently teaching in The Louis Armstrong Jazz Performance Program at Columbia University. She has been widely recognized as a leading interpreter of the works of a range of modern American and European poets as set to music by some of today's most innovative jazz composers, such as Frank Carlberg, Nicholas Urie, Sam Sadigursky, and Steve Grover among others. Correa has also recorded and/or performed with artists such as Steve Lacy and John LaPorta and appeared at numerous festivals, concert halls and clubs in the US, Europe, the Middle East, Africa, South America and India. She is currently at the faculty in the jazz department at Columbia University in New York City.