Tetraptych is the work of a true working band. The superb strengths of the individual players--Hery Paz is a revelation and the rhythm section is marvelous-- are always in service of the music. I have followed Bert Seager for 30 years, and I feel that this the strongest project yet from an artist who is always searching for a more personal expression. A wonderful album in every way. –Fred Hersch 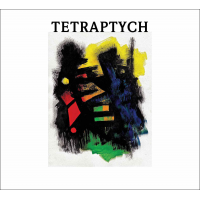 Tetraptych is also the name of their new recording!

Grounded in the lineage of the modern jazz saxophone quartet, Tetraptych brings a breathing conversant quality to the music, where movement, playfulness, sensitivity, and deep groove are ever-present in an openhearted chemistry. These core musical values come to life as the musicians relate and venture into uncharted territory.

In 2015, shortly after their second engagement, these four musicians established a monthly residency that includes two recurring gigs. For the past 20 months, they have been getting together for a few intensive consecutive days of music making, rehearsal, discussion, neighborhood walks, and meals, nurturing both their friendships and a musical vision that has been transformative. They perform monthly at The Lilypad, which has been an essential venue for the creative music scene in Boston, and at Spice, in Ipswich, MA, in a bi-weekly jazz series that Bert Seager started six years ago.

The name of the band is Tetraptych (pronounced “Te-trup-tick”). The word refers to a four-paneled painting where each panel can stand on its own. Seen together, the panorama of panels gives greater meaning to the interaction of the parts. The music is democratic. Ones attention moves from instrument to instrument, panel to panel, as the collective improvisation unfolds.

The band prominently features New York City-based Hery Paz on tenor saxophone. Each one of his solos is imbued with a depth of purpose, a sense of patience and a willingness to venture into the unknown. This commitment reflects the essential inner resources that were required of him during his family’s harrowing emigration from Cuba and subsequent struggle here in the United States.

Listen particularly to his solo on “Star Wise:" by the third chorus Paz has already left the prescribed harmonies far behind. You can still follow his melodic line and grasp the song form, but also sense that he has moved to distantly related keys, creating a tension and energy that makes something entirely new of these chord changes (based on the jazz standard “Star Eyes”). Max Ridley, bassist, immediately joins him in the new keys when Seager drops out. Ridley’s musical intuition is a towering force on this CD—perhaps a reflection of his 6 foot 4 inch frame! He is exquisitely attuned to the shifts in harmony that Paz and Seager supply, all while appearing to get there before they do.

Israeli-born drummer Dor Herskovits is constantly breaking open and reassembling the time feels he is playing, moving the music to new territory, and helping the band create a coherent dramatic story. Notice how his accompaniment evolves and helps shape Paz’s solo on the first tune, “Welcoming the Water."

Bert Seager wrote all of the songs on this recording except for the free improvisation named “Equanimous Botch." It was the first thing they played in the studio for their sound check. They wanted to make sure they could hear each other in the big beautiful room at Futura, and playing free seemed the perfect vehicle for that.

The last tune on this CD, “Blues You Can Use," was the closer in their two-day recording session. There is a deceptive simplicity in the way the groove disguises the 3/4 time signature. One senses the joy they feel as a band exploring new places and energies in a familiar form.

Bert Seager writes, “The evolution of this music, our sound, and approach to the repertoire is nurtured by our collaboration. We deconstruct our tunes, paring down the elements, inventing new structures, making new combinations, leaving some parts aside to work more deeply with others. The resulting music has a feeling and movement that goes far beyond the musical scores that I write for the band. Our performances reflect an even greater willingness to open – and even surrender – to the higher intentions of our musical purpose, often leaving the planned behind.”

More about the musicians in Tetraptych: Pianist and composer Bert Seager has been a leading player on the jazz scene in Boston since 1981. His sixteen compact discs as a leader have won him unanimous critical acclaim from the New York Times, Keyboard Magazine, The Boston Globe, and many other publications. He has performed and recorded with Joe Lovano, Tim Hagans, George Garzone, Bob Moses, Joe Hunt, Jorge Roeder, and Richie Barshay.

Drummer Dor Herskovits was born and raised in Israel. Since his arrival to the US in 2010, he has established himself as a sought-after performer, both as a sideman and leader. Dor has performed with George Garzone, Dave Liebman, Daniel Rotem and Jason Palmer. In 2016 several of his own compositions were featured on the CD “Earprint,” named for the modern jazz collective of which he is a founding member.

Bassist Max Ridley is a Boston-based musician who has performed with Kenny Werner, Ingrid Jensen, George Garzone, Terri Lyne Carrington, and Ra-Kalam Bob Moses. He is part of The Factory Quartet, The Organically Grown Big Band, and leads his own Basement Show Philharmonic.