To put it simply, I wanted to make a record that I would want to listen to. Something that had memorable melodies, that was accessible, but at the same time challenging and stimulating for the players as well as for the listener. 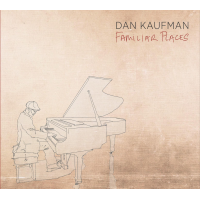 Brooklyn-based Red Piano Records is proud to announce the release of Familiar Places from pianist/composer Dan Kaufman. This album marks Kaufman's debut as a leader, with a stellar line-up featuring Johnathan Blake on drums, Gilad Hekselman on guitar, Matt Clohesy on bass, Sam Sadigursky on saxophones and Keita Ogawa on percussion, in a program of eight original compositions. Kaufman explains the genesis of Familiar Places, “To put it simply, I wanted to make a record that I would want to listen to. Something that had memorable melodies, that was accessible, but at the same time challenging and stimulating for the players as well as for the listener. A record that felt honest and personal."

Familiar Places is a collection of original compositions that Kaufman has written over the last 10 years. He elaborates, “They are like little places, familiar, yet somehow new and unique. Each tune has a specific character, mood, structure, groove, and concept. The goal of the record was to freely explore these places as an ensemble by capturing the essence of each composition." Together the band and the music take a journey, give the listener a sense of having traveled over time, rich varied places that seem both familiar, fresh, and universal.

To navigate these varied and intimate musical places having the right traveling companions is critical. “The musicians are all players I've had long standing musical relationships with, some going back over 15 years, although before preparing for the record we had never played in this particular combination. We all share a certain sensibilty, selflessness, a compositional approach. Although I had a very specific idea of mood and shape of each piece, I wanted the musicians to not feel restrained, but inspired and liberated by the compositions. Indeed, each musician brought their unique voice to the project and made the music their own."

Sam Sadigursky, one of the most underrated saxophonists in New York City brought a fearlessness, a fire and an impeccable attention to detail. Gilad Hekselman displays his deep sense of time and his organic genre-transcending approach. This album features some of his best playing to date, particularly on “Farmington". Johnathan Blake anchors the band with soulful, swinging, and adventurous drumming, and has an uncanny hook up with Kaufman, as heard on the first track, “Windshadow." Matt Clohesy's playing is clear, precise, intense, funky and smart, and is equally comfortable in a wide variety of groves. Percussionist Keita Ogawa brings a richness and warmth with his combination of inventiveness, tastefulness, and his ability to blend in with a modern jazz ensemble.

Kaufman gives us some insight into each composition on the album: “Windshadow", a modern up-tempo jazz waltz, with a floating rolling feeling has a warm folksy quality. It's a tribute to my friend Michael's boat. “Kuumba", (swahili word for creativity) is a happy and simple melody with an Afro-Cuban inspired groove, with deceptively unusual meter and essentially a blues form. It is named for the great trombonist/vocalist Frank Kuumba Lacy who used to sing this tune when we had a weekly gig at Smoke, the uptown New York club. The worlds of Astor Piazzolla and Lennie Tristano collide on “Dansesong", a heady tango in 7/4. “Falling Petals" is a medium waltz, in the vein of the late 60s jazz artists like Joe Henderson, Bobby Hutcherson and Herbie Hancock, which utilizes a series of pedal points in the bass. “Familiar Places" was written back when I was a student at Juilliard, and blends influences of Keith Jarrett-like harmony with Brazilian rhythms. “Dew Eye" takes inspiration from the language of modern indie rock, and alternates seamlessly between 3/4 and 5/4 time. “Farmington" was composed at the Maine Jazz Camp in Farmington, Maine, where I first met Red Piano Records founder Frank Carlberg over 16 years ago. It was the last song we recorded during the two-day recording session, which happened to be in the middle of one of the biggest blizzards in New York history. We let it all hang out. Gilad's solo is remarkable and Sam's wailing improvisation at the coda provides the perfect ending to a joyous session."

Familiar Places is a most auspicious debut by this considerable talent who skillfully manages to bring the listener into familiar places and then takes them much farther. The recording continues to push Red Piano Records towards the front of small independent labels releasing music that is fresh and fearless.

Dan Kaufman has emerged as a leading and promising voice in jazz piano. His playing is adventurous and dynamic while firmly rooted in the tradition. As a versatile and sensitive sideman Kaufman has performed for audiences around the world, with many prominent figures in jazz such as Jimmy Heath, Wynton Marsalis, Christian McBride and Mark Turner. He is also an accomplished composer and arranger. Kaufman began classical piano studies at age four and was working professionally as a teenager. He moved to Boston to attend the New England Conservatory where he studied with Fred Hersch and Danilo Perez. Kaufman joined the Grammy-nominated group The Either/Orchestra and quickly became one of the most in demand young talents on the Boston scene, working extensively with Jeremy Pelt, Miguel Zenon and Bob Moses, among many others. After a brief stint as a member of the highly selective Thelonious Monk Institute of Jazz, Kaufman moved to New York to attend the Juilliard School on a full scholarship and joined their inaugural class of jazz studies. At Juilliard he studied with the great Kenny Barron. Kaufman has established himself as an in demand pianist in New York, joining the working bands of Donald Harrison, Ben Wolfe, Wycliffe Gordon, Rodney Green, Wayne Escoffery and Dominck Farinacci. He also works with many of the worlds top jazz vocalists including Nnenna Freelon, Kevin Mahoganny, Robin McKelle, Allan Harris, Gretchen Parlato, Marilyn Maye, and KD Lang. Kaufman has appeared on numerous recordings as a sideman.