Exceptionally gifted musicians and extraordinary virtuosos, who not only have an impressive repertoire to back it up, but also whose music is ignited by that stroke of genius that few musicians can boast of. --Raul Da Gama 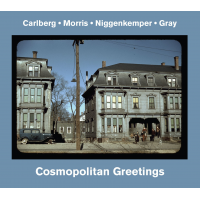 Brooklyn-based Red Piano Records is proud to announce the release of Cosmopolitan Greetings, a collective effort by four veterans of the improvised music scene. This album marks the recorded debut of this quartet, with a line up featuring guitar legend Joe Morris, pianist/composer Frank Carlberg, bass wizard Pascal Niggenkemper and unsung drum master Luther Gray, in a program of three Carlberg compositions, and three collective improvisations. In the liner notes Carlberg describes the genesis of Cosmopolitan Greetings, “On a cold January day Joe, Pascal, Luther and I entered the studio with little more on the musical agenda than to just be committed to the moment and open to whatever anyone had to offer the others. I had written a few sketch-like compositions for the session, but mostly we were going to let our improvisational instincts direct the music... really start with a blank canvas."

The Carlberg compositions on Cosmopolitan Greetings were written specifically for this session with these players in mind. Carlberg explains, “I wanted the compositions to feel open, and rather than dictate the outcome, feel more like invitations to dialog. I knew that with these masterful improvisers just a hint at an idea would be enough to trigger a creative chain reaction; a whisper of a suggestion rather than a declamatory statement."

The musicians navigate the improvisational explorations as well as the written material with ease and verve. They intently listen to each other with only one goal in mind - letting the moment dictate their next action/reaction. No egos here, just a joy of collective music- making while maintaining their strong distinct personalities. And what musical personalities they are!

Joe Morris, is a true legend in avant-jazz and improvised music world. His guitar work stands apart from any other. A uncompromising original voice who during his 40-plus-year career has worked with artists such as John Zorn, Joe Maneri, William Parker, Ken Vandermark and Evan Parker just to name a few.

The Finland-native, Brooklyn-based Frank Carlberg has an extensive catalogue of compositions including pieces for small jazz and improv groups, big band, orchestra, music for dance companies, and over 150 songs with settings of contemporary American poetry. The owner of Red Piano Records has 20 CDs to his name as a leader and countless others as a sideman, and has worked with the likes of Kenny Wheeler, Steve Lacy and Bob Brookmeyer.

Pascal Niggenkemper, a German-French artist, has quickly become one of the most in-demand bassists both on the New York and the European creative music scenes. Pascal has performed extensively on the European festival circuit with the likes of Simon Nabatov, Gerald Cleaver and Tyshawn Sorey, and has several recordings as a leader on labels such as Clean Feed, FMR and NoBusiness Records.

Luther Gray, originally from Washington DC, is a long-time Boston resident. Gray has been a central contributor to that city's vibrant jazz and improvised music scene, playing with everyone from Jerry Bergonzi to Jorrit Dijkstra to George Garzone. He has also toured Europe and the US with various lineups.

The first track Cosmopolitan Greetings, opens with an ominous bass statement before the other musicians join in with angular short phrases in conversational exchanges. Soon the group settles in to an intense piano led excursion while the guitar “comps" and the bass and drum team propel the music forward with gradually growing ferocity. After a dynamic highpoint is reached the guitar takes over displaying obliquely resolving lines performed with warm grace. Bass and piano then provide an ascending backdrop to a drum led section which eventually dissolves and we have a short return of the ominous bass statement from the beginning.

Cadillac Squawk, one of the Carlberg-penned originals, is a declamatory theme which alternates with an open drum statement. After the thematic exposition guitar and piano engage in a musical cat-and-mouse game while the drums push the intensity to the limit. After the chasing game the piano-bass-drums trio take over in a section with even some blues and stride overtones.

Guitar continues with some hyper-kinetic linear improvisations against piano “comping" and the drums probing. The dynamics, but not the intensity, come down a bit for a exhilarating bass statement that lead us back to the thematic statement.

Now and Forever, another Carlberg piece, creates a calm and spacious atmosphere. After a solo piano opening the bass and drums join in in a contemporary jazz ballad statement. A gorgeous airy bass statement follows over an elastic pulse by piano and drums. Some slight variations of the theme is stated with the piano in the lead before the music fades out to the distance.

Who Eats Who? is an episodic exploration which starts with everybody at full tilt. There are exciting solo statements all around but it is the connection between the musicians that is most astounding. The intensity remain high throughout with telepathic interplay between all, an example of which is the remarkable improvised ending.

Research moves at a more deliberate pace and maintains a almost conversational quality throughout, especially between guitar and drums as well as piano and drums. The final track, Get It?, is the third Carlberg composition on this recording. After the thematic statement we find the group settling in to a medium swing tempo and the band swings with a relaxed authority and intensity. After guitar and piano solos they engage in some contrapuntal improvisations before a beautifully crafted drum solo brings us back to the closing theme.