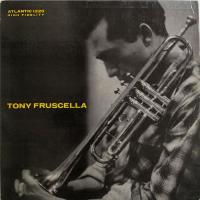 After my post last week on trumpeter Tony Fruscella, reader Don Frese wrote and asked if knew of bassist Red Mitchell's vocalese rendition of Fruscella's recording of I'll Be Seeing You. That song appears on Fruscella's Tony Fruscella, recorded by Atlantic in April 1955. I wasn't aware of Mitchell's vocal so I tracked it down and gave a listen. I was astonished. Before I share with you how this recording came to be, let's listen to the two tracks.

Here's Tony Fruscella's trumpet interpretation of I'll Be Seeing You using the song's chord changes to create an entirely different melody. He was backed by Bill Triglia (p), Bill Anthony (b) and Junior Bradley (d). Jazz at its best...

And here's Red Mitchell's singing his lyrics on top of Fruscella's recording. It appeared in the CD version of Mitchell's Simple Isn't Easy, recorded in 1983 for the Sunnyside label...

Naturally, I had a bunch of questions about how this glorious recording came to be. So I reached out to François Zalacain (above), the founder of Sunnyside Records who produced the Mitchell album and recorded him singing along with the Fruscella song. François is a jazz hero and for decades has made sure that great jazz is documented.

Here's what François told me about the recording:

“In 1977 or '78, I was attending the Nice Jazz Festival in France. One night, I was with a friend, an American painter, and my wife, Christine, in the Roman amphitheater in the vast Jardins de Cimiez main concert area. At 11 p.m. that night, bassist Red Mitchell was scheduled to play a set. [Photo of Jardins de Cemiez in Nice by Philippe Bertini]

“When Red came out, he was alone, without sidemen. After he played a set of songs on the piano, he went to the microphone, took out a cassette player from his pocket and put it close to his mouth. Then Red pressed the play button. As Tony Fruscella's trumpet began to play I'll Be Seeing You, Red sang along with words he had written for Tony's solo. The audience was blown away. So were we.

“A couple of years later in New York in 1983, I was at Bradley's, a club that used to be on University Place in Greenwich Village. Red was living in Sweden at the time and would come to New York each year for five weeks to play with different pianists. By then, I knew him well.

“When I had a chance to talk to him that night, I told him how wonderful his set was in Nice a few years earlier. I said I had been thinking about including his vocal of Tony's solo. Red said his tape wasn't so good. These were the days before downloads and getting friends to burn you something. So I had to go out and find a copy of the Fruscella album so he had something to sing along to.

“In my neighborhood at the time, at 42nd Street and 9th Avenue, I knew a guy who sold used records on the street. I found the Fruscella album there for $1 and bought it. But when I brought it home and put it on, the vinyl wasn't very good. So I called a friend in Paris who imported vinyl albums from Japan. I asked if there was a Japanese pressing of the album. My friend said, 'Yes.' I ordered it from him. When the vinyl arrived, Red came into the studio and we recorded the instrumental track with Red overdubbing his lyrics.

“Once I had the track, could I put it out? I wasn't sure. I was still young in the record business. I called a friend in Los Angeles at Chappell Music, the publishing company. I asked if I could put out the track. My friend said, 'Send it to me.' So I made a copy and mailed it off. A week later, my friend called. He said, 'No way you can put that out. Those lyrics aren't authorized by Fruscella's estate.'

“Red wasn’t thinking of making money off of that track and neither was I. There weren't going to be any royalties anyway. In addition, many people record stuff like this—adding vocals to other musicians improvised lines to songs. So I decided to include the track on Red's Simple Isn't Easy when I released in 1989. I'd simply include the song without naming it. It just pops up suddenly at the end. I also included a 16-minute interview with Red that I conducted. He gave me the story for each official song on the album.

“Red and Tony were friends from their early days in New Jersey. Red was born in New York but lived in New Jersey. When Tony died in 1969, Red said he wrote this lyric to keep for himself. Red said Tony was a guy who loved to go into the woods to be with nature. One day he found a garden snake and kept it as a pet. That's how sensitive he was.

“A year after I released the album, I was at the office when an assistant to director Stanley Kubrick called from London. He said the he and Stanley had been driving a night earlier through France when the Red's vocal on top of Tony's instrumental came on the radio. They couldn't get it in England, and Stanley wanted it very much. So I sent it to him."