Recent Reading: A Book About Vibes 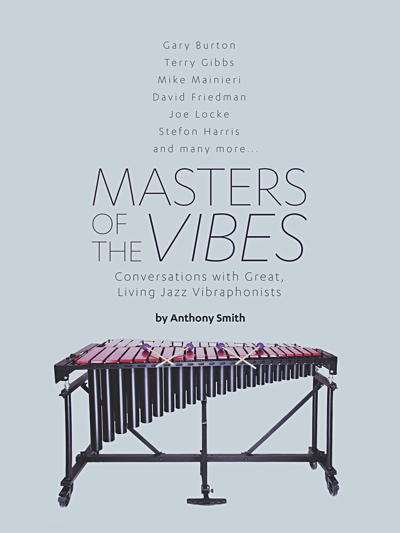 Smith’s book includes a timeline that traces the history of the vibraphone, which early in its life began to be popularly known to its players and to listeners simply as vibes or the vibes. The greater part of the book consists of Smith’s transcribed conversations with 34 vibes players—famous ones like Terry Gibbs, Gary Burton, Charlie Shoemake and Warren Wolf, and newcomers including Yuhan Su, Joel Ross and Jake Chapman.

As for that timeline, in 1918 the Leedy company patented an instrument called the vibraphone. They began manufacturing it in the early 1920s. Lou Chiha, a vaudeville performer known as “Signor Frisco,” used it in his novelty act. His popular recordings of pieces like “Aloha Oe” and “Gypsy Love Song” brought the unusual metal keyboard instrument to prominence. If you have forgotten or never knew the joys of surface noise on early 78-rpm recordings, the YouTube contributor who calls him-, her- or itself “acousticedison” gives you plenty of it as you hear Chiha play “Gypsy Love Song.”

By the end of the twenties, J.C. Deagan, Inc., was selling an instrument similar to the vibraphone and calling it the vibraharp. In 1948 the Musser Marimba Company introduced a vibraphone of its own. “Vibraphone” ultimately won the nomenclature contest and is still generally used to identify an instrument that has had an important role in the development of jazz. By the early thirties New Orleans drummer Paul Barbarin had recorded on vibraphone with Luis Russell, Red Allen and Louis Armstrong. In Armstrong’s “Rockin’ Chair,“ you will hear Barbarin for a second or so at 2:06 and at the end playing one chord. As you will see, the video collage a YouTube contributor added is not from 1929.

In the thirties, propelled by the acceptance of Lionel Hampton with Benny Goodman and of Red Norvo as a bandleader, the instrument began to break out of its confines as a novelty and be fully accepted as a solo instrument. When bebop was in full flower, vibraphonist Norvo put together for Dial Records a septet that combined the swing era icon Teddy Wilson on piano with the undisputed leaders of the bop revolution, Dizzy Gillespie and Charlie Parker. Flip Phillips was on tenor sax and Slam Stewart on bass. J.C. Heard was the drummer. They got happy. By 1945, surface noise on 78s was not as overwhelming as in Lou Chiha’s day.

Milt Jackson, the superlative vibraphonist of the bebop period, was Gillespie’s discovery. In 1945 Gillespie made Jackson a member of his sextet, then of the Gillespie big band. Gillespie sometimes called on the rhythm section to perform as a unit as a means of resting the trumpet section from its powerhouse high-note duties. That was the beginning of the Milt Jackson Quartet, which eventually changed its name to The Modern Jazz Quartet. In its early period Jackson was the MJQ’s principal soloist, although he and pianist John Lewis increasingly came to share solo time more or less equally. Here is the MJQ when Savoy Records was still billing it simply as The Quartet. In addition to Jackson and Lewis, we hear bassist Percy Heath and drummer Kenny Clarke.

Here is the fully evolved MJQ at a 1982 jazz festival in London. Jackson announces his composition.

The conversations transcribed in Anthony Smith’s book do not include one with Jackson, who died in 1999, but he is present throughout the book in references and accolades of his successors. Here’s Shoemake on Jackson:

Yeah, talk about someone who was really adamant about what was right and wrong. He swore up and down that bebop was it. Anything that was away from that was not happening for him…He used huge, gigantic mallets with these big, round balls…and he hit the hell out of the bars. I mean really hard, but it sounded great because the mallets were so soft.

I’ve always thought that perhaps Milt made the single most important contribution to the vibraphone. Up until that time, the vibes were played with hard mallets, and kind of in a clanky way. Percussively, not much use of the damper, or the damper possibilities. Not much phrasing or dynamics. It was just pound away on the thing. I’ve always assumed that because Milt was a guitarist and a singer, he wanted a more expressive, mellow thing to happen. So he slowed down the vibrato, which the other guys hadn’t thought of doing, and he played with soft mallets and got this reall mellow, bell-like, sound. It was like, ‘Wow, who knew the vibraphone could sound like that?’

I did a tribute to Milt Jackson with Bags’ rhythm section—Mike LeDonne, Bob Cranshaw and Mickey Roker. Frankly, I have so much admiration for Milt, that I felt I was really stepping out on a limb to do that project…I remember playing the Detroit Jazz Festival with that band, and sitting in the front row was Milt’s whole family. They all had their arms crossed and were looking at me like, ‘What are YOU gonna do?’ Talk about the pressure being on. But I remember it was a great feeling to be embraced by Milt’s family, after the concert.

Milt Jackson and Bobby Hutcherson. Probably my main influences, even to this day. Those were the only two guys I listened to on vibes. Their approaches resonated with me.

Smith follows his introduction to the book with a tribute to Hutcherson, of whom he writes:

Rather than discuss him with fellow vibraphonists, a more fitting comparison can be made with the great icon of the saxophone, John Coltrane. Like ‘Trane, Bobby pushed well beyond the accepted technical boundaries of the era and singlehandedly redefined the possibilities of his instrument.

Here is Hutcherson at the Mount Fuji Jazz Festival in Japan in 1989 with Herbie Hancock, piano; Ron Carter, bass; and Tony Williams, drums. He plays his composition “Little B’s Poem.”

Hutcherson died in the summer of 2016.

I have never been a fan of transcribed interviews, viewing them as substitutes for writing. But there are exceptions to just about everything, and in the case of Masters of The Vibes, Anthony Smith makes the genre enjoyable and—most important—informative.