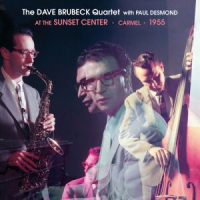 New music by the Dave Brubeck Quartet has surfaced on the European label Solar. Previously unissued, it finds the group brimming with the harmonic daring, contrapuntal interaction and humor that were beginning to make them famous. A 1954 TIME magazine cover story about the pianist, the success of the band’s Jazz Goes To College album and lots of radio airplay had them in the public eye and ear in an era when such prominence was possible for a jazz group. Eight of the tracks were taped at the Sunset Center in Carmel, California, in June of 1955 and one at New York’s Basin Street the following summer.

Comedian Mort Sahl’s introduction of the band is an audio blur, hard to understand. That’s too bad because whatever he said brought clearly audible chuckles from the quartet. Otherwise, sound quality of the location recording is adequate, perhaps adequate+. The instruments are distinct and in reasonable balance, although there are places where pitch correction in the remastering would have helped. The playlist is made up of familiar items in the quartet’s mid-fifties repertoire. Brubeck and alto saxophonist Paul Desmond take approaches that make the content fresh and often surprising. They begin with “Gone With the Wind.” Nearly fifteen minutes long, it incorporates trademark aspects of the principal soloists; Desmond’s lyricism and Brubeck’s power, although there are tradeoffs in both areas. Desmond flows through “I’ll Never Smile Again,” fully engaging his ability to fit quotes into unlikely harmonic nooks and crannies. In his solo, Brubeck scatters quirky chord bouquets.

In the arrangement that Brubeck Octet trumpeter Dick Collins fashioned in pre-quartet days, “Jeepers Creepers” follows the routine familiar to listeners who know the Columbia Brubeck Time album. Soloing, Desmond applies an astringent tone and note substitutions that on manuscript paper would look “wrong.” When he plays them, they are right—and occasionally hilarious. “Yeah, Paul,” Brubeck says more than once. As usual when they played the piece, it gets a spoofy Dixieland tag ending. With some heat, Collins once told me that he didn’t understand why they “tacked that on,” but it became a permanent addition.

The minor harmonies of “Brother, Can You Spare A Dime” inspire Brubeck to meld a circle of fourths into his solo for a deeper statement than on the Brubeck Time version. Desmond’s wistfulness in “Little Girl Blue” takes a funky turn with a ferocious blues lick of his invention and a visit to “St. James Infirmary” before he soars into the horn’s altissimo register. Regrettably, he did less of that stratospheric soaring as the years went by. He also goes altissimo in “Take the ‘A’ Train,” but it is his minor-key Orientalism that grabs attention there before Brubeck launches his own series of quotes. Both soloists are full of vigor on the album’s final track, “Two-Part Contention,” recorded at Basin Street for an NBC Monitor radio broadcast that has a nostalgia-inducing signoff by announcer Bob Collins.

A final note: so much attention went to bassist Eugene Wright and drummer Joe Morello in the Brubeck Quartet’s final decade that the memory of Norman Bates’ and Joe Dodge’s consistency and strength as a rhythm team may tend to fade. Among its other virtues, this album is a reminder of the sympathetic support and responsiveness that Bates and Dodge brought to the quartet during their tenure.