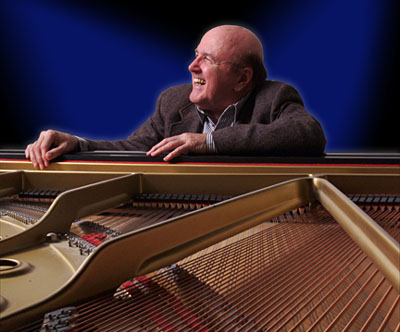 Maybeck is a small hall in Berkeley, California, loved by pianists and listeners for the perfection of its acoustics. Carl Jefferson of Concord Records was so taken with the sound of the room that he initiated a series of 42 solo piano recordings there. It began with Joanne Brackeen in 1989 and ended with James Williams in 1995. In between is a variety of the finest pianists in jazz, among them Dick Hyman, Jaki Byard, Ellis Larkins, Jessica Williams, Hank Jones and George Cables. After pianist Dick Whittington bought Maybeck, but before Concord discovered it, Jack Reilly was one of the first artists who played there, so he is not included in the series. That is a pity, because Reilly's Maybeck concert equals the best of the Concord Maybeck albums.

All is not lost, however. Reilly recently discovered that his 1988 concert existed on a cassette tape. He concluded that it was some of his best playing and decided to releaseit on Unichrom, his private label. The transfer to CD may not bring the sound up to 2010 digital perfection, but it is entirely listenable. The slight sandpaperiness around the audio edges does nothing to obscure Reilly's virtuosity and creativity. Into a program of jazz and classical pieces he pumps energy, imagination and—in some cases—swing that is almost physically palpable. His program encompasses Cesar Franck, Chopin, Ravel, Strayhorn, Ellington, Gershwin, Bill Evans and two of his own compositions. His opening piece is the Franck “Prelude, Chorale and Fugue," performed with subtlety, power and fidelity to the composer.

Reilly introduces jazz to the concert when he melds Chopin's C-major Prelude with “Take the 'A' Train" and the Chopin G-minor Prelude with “It Don't Mean a Thing if it Ain't Got That Swing." The commonality he finds in Chopin and Strayhorn, Chopin and Ellington, corroborates Ellington's famous dictum that there are only two kinds of music—good music and the other kind. Reilly makes a medley of a Ravel minuet and three Evans pieces, incorporating stride passages into “Waltz for Debby" and giving “Peri's Scope" harmonic complexity that enhances the joy of his presentation. “November" is a fast ¾ modal piece that swirls, rumbles and blusters like the month that gave it its name.

Reilly introduces some of the usual suspects into the lineup of his Gershwin medley, invigorating “Someone to Watch Over Me" and “My Man's Gone Now" with tempo and harmonic shifts, and ending with an “I Got Rhythm" that summarizes his pianism and musicianship. It has blindingly fast tremolos and runs worthy of Tatum, the left hand rampant on a field of stride, sophisticated chord substitutions in shifting harmonies and a free flurry at the top of the keyboard that might make Cecil Taylor raise an eyebrow.

Throughout the concert, Reilly goes through chordal hoops and dazzling time shifts while giving the listener melody to hold onto; a neat trick. He is an original.