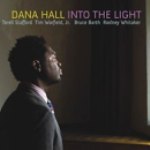 slideshow
Dana Hall, Into The Light (Origin). Drummers who flaunt their technique can be enemies of music when their busyness becomes the center-ring distraction in a band. Dana Hall is a busy drummer, but in his case that's a compliment. He accompanies with waves of rhythmic patterns surging and swelling behind, under and around soloists. This 40-year-old Chicagoan—debuting here as a leader—manages to amalgamate his virtuosity so that he melds into the flow of the soloists' improvisations. That places him in a line of aggressive but accommodating drummers that goes back at least as far Sid Catlett and includes Max Roach, Roy Haynes, Elvin Jones and, more recently, Jeff “Tain" Watts.

From the beginning of the album's first piece, Herbie Hancock's “I Have a Dream," Hall dramatically demonstrates his mastery of what might be called integrational drumming. The dynamics of his pops, snaps, cymbal splashes and ingenious divisions of time rise and fall with the intensity of the performance as trumpeter Terell Stafford, saxophonist Tim Warfield, Jr. and pianist Bruce Barth solo. For all its vigor, there is also subtlety in Hall's playing, and in the concepts in the album. Hall's drumming transition from “Conversion Song" into “Orchids" is a case in point. It creates the effect of a two-part suite and sets up bassist Rodney Whitaker's superb solo. The title tune is the shortest in the album and, with the exhilaration of its collective chance-taking, the freest. The longest, “Jabali," combines harmonic freedom, in the Ornette Coleman sense, with traditional swing and a rare instance of silence from Hall while the horns sing his closing melody.

Stafford and Hall are mutual admirers, with cause, and sidemen in one another's bands. Stafford reaffirms here that he is one of the most important trumpeters to emerge in the new century. Warfield, a swaggering tenor saxophonist, doubles on soprano and has fine moments on each horn. Barth, often type-cast as a mainstream post-bop pianist, demonstrates that he can go as far out as Hall, a former aerospace engineer. A member of the faculty of the University of Illinois at Urbana-Champaign, Hall is accomplished in composition and arranging. All of the music on the CD is his except for the Hancock piece, Warfield's joyous “Tin Soldier and Whitaker's “For Rockelle," a ballad based on “My Funny Valentine." Into The Light was released late in 2009. It took me a while to get around to it. I'm glad that I did.