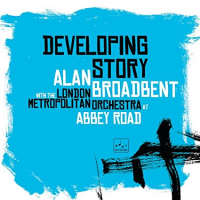 Broadbent’s title composition is in concerto form, although it is not described as a concerto. His piece combines jazz and classical sensibilities in a flow that evolves with logic rarely achieved when genres are blended. Broadbent’s booklet notes identify the orchestral beginning as a “forte introduction.” Robustly, it lives up to the promise of strength before a flute, then an oboe, quietly state a five-note theme and Broadbent’s piano begins telling the story promised by the title.

The other members of his trio, bassist Harvie S and drummer Peter Erskine, join him as the London Metropolitan Orchestra unfolds the beauty of his orchestration. The second movement is an elegant waltz dedicated to the composer’s wife, Alison. Its swelling strings and woodwinds, the clarity and brilliance of LMO trumpeter John Barclay and Broadbent’s relaxed piano improvisations create calm that for the moment eclipses the memory of that forte beginning. The energetic third movement incorporates an incisive Erskine drum solo highlighted by cymbal splashes as dramatic as the trumpet and horn exclamations leading to the collaboration of Broadbent’s piano and orchestration before the piece subsides.

The remainder of this generous album presents Broadbent’s playing and arrangingof six classic compositions from the bebop era forward, beginning with the 1946 Tadd Dameron ballad “If You Could See Me Now.” The arrangement has resourceful uses of flutes and horns, a few seconds of delicious piano counterpoint and a lovely bass statement from Harvie S over the closing chords. French horns and tympani announce John Coltrane’s “Naima” before Broadbent’s arpeggiated solo piano statement of the melody. The arrangement has a trumpet fanfare, a section of fanciful dancing woodwinds and— following a peaceful interlude—one massive orchestral chord leaving no doubt that the piece has ended. Broadbent gives Miles Davis’s “Blue In Green” a full orchestration accompanying his piano, a section of unaccompanied solo piano and the quietest imaginable conclusion.

Broadbent’s own “Lady In the Lake” is one of the compositions he wrote for Charlie Haden’s Quartet West during the period when they explored film noir themes. His piano solo incorporates a bit of tremolo, and there’s another peaceful ending. His treatment of Davis’s “Milestones” has enormous energy, with emphatic passages by the orchestra’s trumpets and later, by flutes, strings and low instruments. In the piece, Broadbent develops a rhapsodic character that Davis may not have known lay hidden in it. In his notes, Broadbent points out that “Children Of Lima” is essentially as recorded when he wrote it as a member of Woody Herman’s band and they made it part of an album with Herman and the Houston Symphony Orchestra.