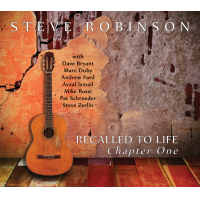 Art of Life Records is proud to present, Recalled to Life-Chapter One, the debut release by British guitarist and composer Steve Robinson. Steve was a member of the British group 'Igginbottom which recorded the album “Igginbottoms Wrench" in 1969 which also included guitarist Allan Holdsworth. Recalled to Life-Chapter One includes ten original compositions by Steve and features Pat Schroeder on drums, Dave Bryant on drums, Steve Zerlin on electric & acoustic bass, Marc Duby on electric bass, Andrew Ford on piano, Avzal Ismail on keyboards and Mike Rossi on tenor saxophone. Recorded at various locations in South Africa, India, United Kingdom and the U.S.A. All tracks mixed and mastered by Paul G. Kohler at Art of Life Studios in Charleston, South Carolina in 2016. Art of Life Records will be releasing Recalled to Life-Chapter Two, the follow-up recording by Steve in 2017.

Back in the late '80s I became aware of an album by a band called 'Igginbottom. “Igginbottom's Wrench" came to my attention due to the fact that it was guitarist Allan Holdsworth's first official recording. I managed to get my hands on a cassette tape copy of the original LP long before the album was reissued on CD and before the internet existed as the album was nearly impossible to find back then. Upon listening to the album for the first time it sounded like there were two guitarists in the band. Since my cassette copy did not have song titles or personnel listed I had no idea who the other band members were and simply assumed that Allan Holdsworth had overdubbed multiple guitar tracks.

About ten years later I managed to score an original stereo LP copy of Igginbottom's Wrench on Deram Records (SML 1051) on eBay and it was then that I discovered that 'Igginbottom actually had two guitarists, Allan Holdsworth and Steve Robinson. Upon learning this I thought to myself, whoever this Steve Robinson is he's just as good as Holdsworth as I could not tell them apart while listening to the album. The thing that really struck me the most about 'Igginbottom was the two guitar harmony parts. It was like hearing the piano being played on two guitars due to the fact that Steve and Allan intentionally played different notes and different chords at the same time creating true poly-chords much like pianists do. Needless to say, I've always felt that that album was way ahead of its time, especially for the year 1969, and in many ways still is. Ever since hearing the “Igginbottom's Wrench" album for the first time I had always wondered what had become of guitarist Steve Robinson. Surely he must have recorded and released some music since his debut recording with 'Igginbottom back in 1969.

A thorough internet search came up empty so I was left pondering this question. One day a good friend of mine, Gil Solorio, sent me an email and told me that Steve Robinson was on Facebook and that I should contact him. I reached out to Steve and told him who I was and that I was a fan of his music and wanted to know if he had written and/or recorded any music over the years and he replied quickly by sending me several MP3's of songs he had recorded in his home studio over the years. After I picked my jaw up off the floor I emailed Steve and told him that I was interested in working with him to produce and release some of his music on Art of Life Records and that was the genesis of the idea for the recording and release of the album.

After three years of recording, mixing and sending hundreds of files and thousands of emails (not an exaggeration) back and forth to Steve, two bass players, two drummers, two keyboard players and a tenor saxophonist on four different continents, it is my distinct honor and pleasure to present to you guitarist and composer Steve Robinson's debut recording as a leader, Recalled to Life-Chapter One. ~ Paul G. Kohler