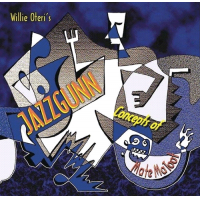 Originally released on May 15, 2000, Willie Oteri’s Jazz Gunn: Concepts of MateMaToot celebrates the beauties that fifteen years of technological progress and art can offer. This rerelease includes additional detailed artwork by Miko Zen as well as enhanced audio while keeping the original hot and cool sounds that were performed live and captured on tape by some of Austin’s top musicians.

Guitarist/Producer Willie Oteri conceived of the approach: to take some of the best known musicians from the Austin area and record live jazz-flavored jams to tape. This idea came after spending over a year watching and listening to various musicians work together in a variety of situations, as well as from his collaborations with Drummer Brannen Temple. With no rehearsals or charts, Concepts of MateMaToot was produced and recorded in only two days, resulting in one of the more listenable creative jazz recordings of the time.

High in demand, Michael is a young player whose resumé includes the Jimmy Smith Quartet. His smooth style, creative sense of melody and remarkable tone shine on these tracks; his keen sense of arrangement was invaluable during the session.

Born in Austin Texas, Brannen is one of the most sought-after drummers in the business. Among others, he has recorded, toured and/or performed with Sheena Easton, Chaka Khan, Jody Watley, Christian McBride, Roy Hargrove and Charles Gayle. In addition, Brannen’s founded his own groups: Temple Underground, Hot Buttered Rhythm, The Brannen Temple Group and Blaze.

Grammy-nominated Chris Maresh is a talented musician who is high in demand. He has recorded with Mitch Watkins, Eric Johnson, Abra Moore, Monte Montgomery and Betty Elders and tours regularly with Eric Johnson. His talent as an arranger and ability to second guess other players made for a solid foundation on the recording.

Chris is a well known guitarist in the Austin area who has worked with MC Overlord, Trish Murphy and Kacy Crowley. Chris' style, dynamic solos and sense of rhythm work well to balance out these tracks and complement Willie's raw, off-the-cuff style.

Willie’s past works include collaborations with Tony Levin, Mike Keneally (Spiral Out DIW records 2003), Scott Amendola, Dave Laczko, JA Deane (WD-41), Jerry Marotta and Shrunken Head Shop, among others. Oteri performs regularly in Austin with his duo WD-41 and tours Europe in a variety of configurations.