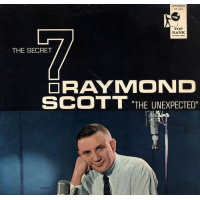 Most jazz fans know little or nothing about Raymond Scott. In all fairness, Scott, a pianist and arranger, was a rather illusive and mysterious figure on the music scene from the 1930s onward and his recordings often defied all established categories. Back in the early 1930s, Scott pioneered the novelty genre on recordings like The Toy Trumpet and Walkin' the Dog, and many of his quirky melodies were adapted for cartoons of the era.

But Scott was no cornball washboard king or a precursor of Spike Jones. Scott was a meticulous perfectionist, and in his pre-war years his twisted pop music had more in common with the Sauter-Finegan Orchestra, which would come later. In hipster parlance, he was out there. Way out.

Scott also knew his swing. By the mid-1940s, the Juilliard Music School graduate attracted the likes of Charlie Shavers, Les Elgart, Ben Webster, Specs Powell, Israel Crosby, Johnny Guarnieri and Tony Mottola to his orchestras. These groups were largely experimental recording ensembles rather than formal dance bands, and many leading jazz musicians soon came to realize that Scott not only had a highly inventive mind but that he was ahead of his time. [Photo above, clockwise from lower left, Dave Wade on trumpet, Fred Whiting on bass, Dave Harris on tenor sax, Raymond Scott on piano, Pete Pumiglio on clarinet and Johnny Williams on drums]

An engineer and developer of electronic instruments, Scott was fascinated with mood and sound. Unwilling to follow in the footsteps of commercially successful contemporaries, Scott by the late 1940s began recording pop songs with futuristic twists, often featuring his wife at the time, singer Dorothy Collins. He also was among the first to use computers and synthesizers to create music. In this regard he's widely considered the father of American electronica. [Photo above, from right, Les Paul, Raymond Scott, Scott's wife Dorothy Collins and Paul's wife Mary Ford]

While Scott (1908-1994) never quite kicked the novelty habit, his music grew increasingly textured and sophisticated over time. Once he started his Manhattan Research studio in 1946, he began devloping new electronic instruments, and his electronic music became fascinating audio collages. Over the decades, his albums retained a whimsy, but there were plenty of strokes of arranging brilliance, too. [Photo above of Scott in his studio]

In 1959, Scott recorded The Unexpected with a group he called the Secret Seven. Recorded in January 1960, there was no mention of the musicians used on the date, but they were clearly seasoned jazz artists. Later the personnel (nine in all) was revealed : Harry “Sweets" Edison (tp) Sam “The Man" Taylor (ts) Toots Thielemans (hca) Wild Bill Davis (org) Eddie Costa (p,vib) Kenny Burrell (g) Milt Hinton (b) Elvin Jones (d) Dorothy Collins (vcl) Raymond Scott (dir).

The album seemed to be two concepts in one. Intermingled between serious jazz orchestral pieces were instrumental interpretations of nursery rhymes. It's unclear if this was an intentional dig at Nelson Riddle's Hey Diddle Riddle, recorded the previous year, or merely an adult and children's record fused into one.

One selfishly wishes Scott would have adhered more closely to traditional arranging. Then again, the avant-garde mind travels where it pleases.

JazzWax tracks: I recommend you first listen to Raymond Scott at Spotify or YouTube before buying to gauge your interest. I find much of his experimental music fascinating, but I also recognize it may not be everyone's cup of coffee.

JazzWax clips: Here's Night and Day from The Unexpected...

Here's The Raymond Scott Quintette in 1955 with Scott on piano and an arrangement that sounds like acoustic music yearning to be electronic...

Here's some of Scott's electronic music from the 1950s and '60s from the Manhattan Research Inc. album. The ads are futuristic japes...