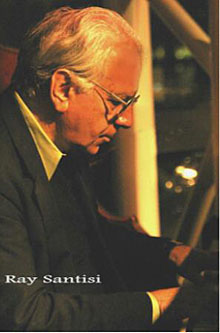 slideshow
1. “Where is Jazz Today? Right Where It “Aught" To Be! --Victor Magnani."

2. “Jazz in the new millennium. There are naysayers who believe that the genre doesn't stand a chance in today's hit-driven music."

3. “Today, jazz has reemerged and has re-familiarized itself with the era of today by appearing on the silver screen and on the stage."

Ryles Jazz Club, 212 Hampshire Street, Inman Square, Cambridge, presents The Ray Santisi Collective, including Ray Santisi [piano], Marshall Wood [bass], Gary Johnson [drums] and Dick Johnson [horns]. These stalwarts of the Boston jazz scene combine more than a century playing and improvising standards to bop to 'out' playing, all the styles with the underpinnings of inherited understanding and experience. This will be an evening not to be missed.

Reservations are always a good idea at the neighborhood club, long a Cambridge landmark and a monument to live jazz in Boston. Call 617 876 9330 and reserve a booth by the window or a cocktail table down front. Ryles Jazz Club offers a delicious snack menu and is wheelchair accessible. There is a $10 cover charge at the door.

He has been a featured pianist on Blue Note, Capitol, Prestige, Sonnet, Roulette, and United Artists Records. He has also recorded on Bethlehem, Transition, and Rasan record labels.

Santisi is professor of piano and harmony at Berklee College of Music in Boston. He has taught at Stan Kenton's summer jazz clinics on college campuses throughout the US, performing in Europe, Scandinavia, and Asia.

An alumnus of Berklee College of Music and Boston Conservatory, Professor Santisi has been awarded grants from the National Endowment for the Arts in composition and performance. He is author of “Jazz Originals for Piano". He was a founder of the early Jazz Workshops in Boston and co-owner of the famous Stables Jazz Club. Learn more about Santisi's discography and gig schedule at www.AllAboutJazz.com

MARSHALL WOOD [bass], Born in Omaha, Nebraska and raised in Washington, D.C., Marshall moved to New England in 1979, where he quickly became one of the most sought after bassists in the area. His reputation as a swinging and sensitive musician landed him recording dates with Anita O'Day, Monty Alexander, Tommy Flanagan, Dave McKenna, Ruby Braff, Scott Hamilton, Ray Santisi and Gray Sargent. He has also performed in top jazz festivals in the U.S., Canada, Europe, and South America, and tours with Tony Bennett.

Drummer, Garry Johnson, has been keeping time for 37 years with, among others Scott Hamilton, Dave McKenna, Ken Peplowski, Keely Smith and the Nelson Riddle Orchestra.

For four years, he traveled extensively with the Artie Shaw Orchestra under the direction of Dick Johnson (his dad!). While touring, he accompanied artists such as Buddy DeFranco, Dizzy Gillespie, Rosemary Clooney, Frankie Laine. Helen Forest, Connie Haines and Ruby Braff. Currently, Johnson freelances in the New England area. You can hear him with The Ray Santisi Collective Sunday evenings at the Terrace Lounge in the Marriott, Copley and with The Patricia Adams Quartet first Sundays at Ryles Jazz Club.

Johnson studied with Bill Flanagan, Fred Buda of the Boston Pops and Alan Dawson. He attended the Berklee College of Music from 1972 to 1974.

On stage this gig with his son, Gary, Dick Johnson is best known as a big band clarinetist in The Artie Shaw Orchestra. Born in Brockton, Johnson plays alto saxophone, clarinet and flute.

In 1983, when the “new" Artie Shaw Orchestra was formed (Shaw had been out of the music business for nearly three decades), Boston-based clarinetist Dick Johnson was chosen to lead the band, which he has done to this day. After Shaw died in December of 2004, Johnson decided to record a tribute to his long-time friend and musical inspiration, but he vowed that it would be more than a sweet and sentimental stroll down memory lane. Johnson continues an active schedule and is a frequent and welcome guest with the Ray Santisi Collective.