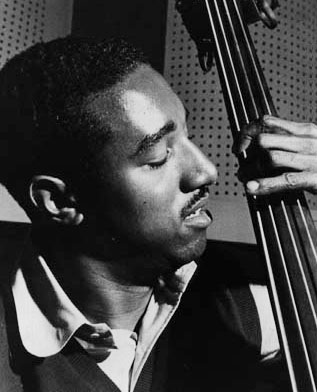 slideshow
Grammy Award-winning double-bassist Ray Brown was a leader in defining the modern jazz rhythm section -- in addition to being a first-rate soloist.

Raymond Matthews Brown was born October 13, 1926, in Pittsburgh, PA -- birthplace to many jazz greats. His musical education began with piano lessons, but when he discovered how many pianists there were in his high school, Brown thought of switching to trombone, but could not afford a horn. The school orchestra needed a bass player and had an extra instrument.

Drawn to Duke Ellington tunes playing in the city's beer garden jukeboxes, Brown locked in on the bass lines of a legend: Jimmy Blanton (left). Ray would learn and practice those lines every day and while still in high school, he began plying his newfound trade in jazz clubs in and around Pittsburgh.

After graduating, Brown hit the road with several big bands, but stories about 52nd Street in pages of Downbeat pushed him to buy a one-way ticket to New York. On his first night in the city, he bumped into a friend from the road, pianist Hank Jones, who introduced him to trumpeter Dizzy Gillespie. Dizzy was looking for a bass player and hired Brown on the spot. Listen to Brown describe his first rehearsal with Dizzy Gillespie

That small group was breaking the new ground of bebop, but Gillespie still had a big band to fill out and Ray's sound, intensity and precision fit perfectly. Dizzy showcased the young bassist on the tune “One Bass Hit" with the Dizzy Gillespie Orchestra.

Joining Brown in the band's rhythm section: Milt Jackson on vibes, drummer Kenny Clarke and John Lewis on piano. The four musicians discovered a cool, comfortable chemistry, the signature of what became the Modern Jazz Quartet in 1952.

But first, Ray met singer Ella Fitzgerald. He became her accompanist, musical director and in 1948, her husband. The union was short-lived and the couple divorced four years later.

In 1949, Ray began an 18-year relationship with Norman Granz' Jazz at the Philharmonic. With JATP, saw Brown take the stage with Roy Eldridge, Ben Webster, Flip Phillips, Benny Carter and numerous others, including pianist Oscar Peterson on a fateful night at Carnegie Hall.

When drummer Buddy Rich bowed out at the last minute, Brown and Peterson were suddenly a duo, and their connection made the music ring. Ray went on to play with the Oscar Peterson Trio for 15 years.

I don't think another group has achieved that closeness, that 'breathe together' bond that we had.
Oscar Peterson

In 1966, Brown settled in Los Angeles where he was soon in high demand working for various television show orchestras. He also accompanied some of the world's top singers including Frank Sinatra, Billy Eckstine, Tony Bennett, Sarah Vaughn and Nancy Wilson. He managed the young Quincy Jones, produced shows for the Hollywood Bowl, wrote bass instruction books, and developed a jazz cello.

During the early 1970s, Ray got to fulfill a lifelong dream and work with Duke Ellington just prior to the legendary band leader's death. The two recorded a tribute album to Brown's boyhood idol, This One's for Blanton.

In addition to performing and recording, Brown was dedicated in his late career to passing on his knowledge and experience to new generations of talented musicians, becoming deeply involved in jazz education and mentoring. He received numerous jazz awards, including the National Endowment for the Arts Jazz Masters Award.

On Tuesday, July 2, 2002, Brown was in Indianapolis, Indiana for a gig. That afternoon, Ray indulged in his favorite activity outside of jazz: golf. It was said that if there wasn't a suitable course nearby, a club owner had little chance of booking the legendary bassist. After his round, Ray returned to his hotel to catch a brief nap before preparing to play that night. Ray Brown died in his sleep.