...an unusual and welcome addition to the jazz bibliography. It’s also a granular look at Cobham’s work and development… Gruber paints a fascinating sonic and emotional picture… packed with illuminating anecdotes and commentary… (a) vibrant and organic project. —Carlo Wolff, Downbeat 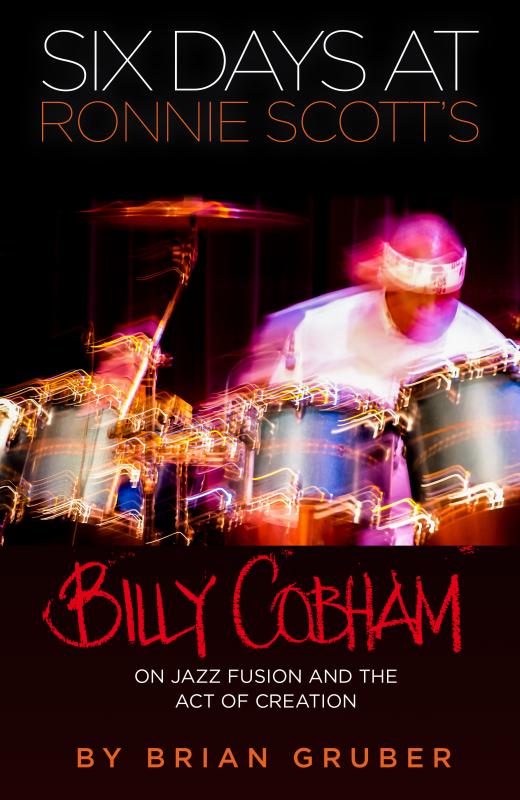 slideshow
Few musicians have transformed a genre like Panama-born, New York-raised Billy Cobham. Six Days at Ronnie Scott’s: Billy Cobham on Jazz Fusion and the Act of Creation is a one-of-a-kind oral history of a legend’s life work. From his early days with Horace Silver and Dreams to the epochal Bitches Brew sessions with Miles Davis to the breakthrough Mahavishnu Orchestra and beyond, here is a first-ever deep dive into six decades of musical innovation. The book’s setting is six days at iconic London jazz club Ronnie Scott’s, as Britain’s hottest arranger Guy Barker orchestrates and leads a big band performing Cobham’s greatest works. Jazz greats such as Ron Carter, Randy Brecker, and { Jan Hammer}}, family members, club owners, critics and superfans provide colorful insights and remembrances. Readers are given an unprecedented behind-the-scenes look into rehearsals, performances, adjustments and preparations between shows, and the evolution of a sold-out six-day run.

Gruber and Cobham launched the book with an onstage discussion and audience Q&A at Ronnie Scott’s Jazz Club in London on June 27th. Following the discussion, Cobham and the Guy Barker Big Band reprised last year’s concert run, immortalized in the book.

“...an unusual and welcome addition to the jazz bibliography. It’s also a granular look at Cobham’s work and development… Gruber paints a fascinating sonic and emotional picture… Gruber is a strong interviewer, and his affection for Cobham’s music seems to have given him exceptional and unusually fruitful access to players in Cobham’s world… packed with illuminating anecdotes and commentary… While written by a jazz aficionado for other jazz aficionados—Cobham’s discussion of how and why he tunes his drums is quite technical—Six Days is also more broadly engaging… this vibrant and organic project… The book affirms Cobham’s status in modern jazz history, as well as making you wish you’d caught at least one of those gigs at Ronnie Scott’s." —Carlo Wolff, Downbeat Magazine

“The book is a massive undertaking... Despite being raised a generation and culture apart from Bed-Sty raised Panamanian born William Emanuel Cobham, Jr., Gruber manages to pull off a remarkable feat of music journalism... The interviews with Cobham cover a galaxy of subjects; from the cruel realities of the New York public school system, to the rhythmic complexity of a woman sashaying when walking or the sonic intricacies of live performance...There is so much information in this book that any serious student of Jazz, Fusion or music history will reap a bountiful harvest...A nice touch is the Spotify Soundtrack for each chapter of the book that contains some very unexpected musical gems. Hats off to Brian Gruber who accomplished what few could have written with such elaborate authority." —Tee Watts, Cadence Jazz Magazine

“An interesting concept... his questions are knowledgeable and penetrating... rather than dallying in the kind of film-flam that obfuscates the detail, memories and opinions that make a biography breathe... Fast paced with anecdotes pouring from every page, it wraps with Cobham describing his dream line-up to play with. Want to know who? Then go grab a copy." —Jon Newey, Jazzwise

“The mark of a good read is something that conjures up pictures and just in that description, you're already putting yourself backstage and seeing these conversations happen... an absolutely fascinating read. Any fan is obviously going to enjoy this." —Nigel Williams, Jazz FM

“Remarkably, Brian Gruber's book is the first written on this legendary musician and although not a biography, it's certainly biographical, overlaying six days at Ronnie Scott's with six decades of Billy's remarkable life and career... It's a fascinating read... Cobham opens up and discusses several topics that I have not previously seen him discuss. It's a terrific insight into the musical and personal life of this game-changing, world class drummer and is an essential read for fans of Cobham, Jazz, fusion and the culture of the 60s and 70s." —Brent Keefe, Drumhead Magazine

“Brian Gruber's fantastic new book... gives us a rare, behind the scenes look at the making of a six-night performance... Gruber virtually puts the reader in the cafe, the nightclub, or in the car alongside him and Cobham. There are so many fantastic stories and so much musical history... Brian Gruber's Six Days at Ronnie Scott's: Billy Cobham on Jazz Fusion and the Act of Creation will certainly stand the test of time alongside some of the greatest tomes ever penned about jazz musicians." —Eric “Doc" Smith, BeyondChron.

For review copies of the book, or for interviews with author Brian Gruber.