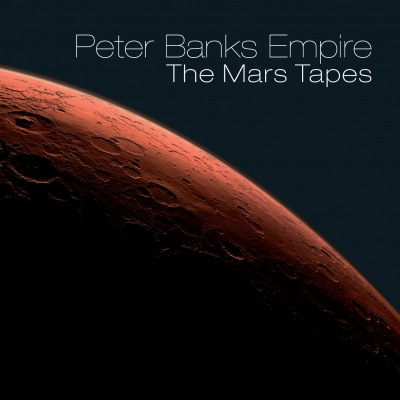 slideshow
London, UK – Much to the excitement of prog fans worldwide, rare recordings of guitar legend Peter Banks, best known for his work with YES and FLASH, is now available on GONZO Multimedia! Peter Banks Empire 'The Mars Tapes' (2-CD set) represents Empire lll in rehearsal at Mars Studios in Los Angeles in 1979. The band had set up camp at Mars Studios for six months rehearsing and showcasing their music, much of which has been unheard until this release. The band basically recorded every thing they did off the board, tape hiss and all.

Peter Banks (RIP 2013) and Sidonie Jordan, who not only co-wrote, but fronted the band with her powerful vocals, founded Empire in the early to mid-seventies after Peter’s FLASH endeavors and attracted artists such as Phil Collins. Peter and Phil had joined forces in a band called 'Zok And The Radar Boys' which was pre- Empire for Peter, and pre-Brand X for Phil. “Sky At Night” (bonus track) features Phil Collins on drums and backing vocals and Jon Giblin on bass and is testimony of their collaboration.

Sidonie Jordan, who has an extensive list of music credentials to her name, including a diversified solo career as a staff writer/recording artist for A&M Records, and has recorded for other labels such as Capital Records, Electra Records and Trojan Records. (Her song and recording of ‘All God’s Mornings’ was produced by Peter Townshend and featured on his ‘With Love’ album. Sidonie is currently producing and writing with Jez Larder owner of Skyline Studios in Sunbury- On-Thames UK, and Empire lll drummer, Mark Murdock, more recently known for his 'Cymbalic Encounters’ release featuring members from Brand X, agreed to release these recordings as a dedication to the memory of Peter Banks and his great contribution to progressive rock music.

Says Sidonie, “ 'The Mars Tapes' were recorded live at Mars Studios in Los Angles during the summer of 1979! And include a few tracks that never appeared on any Empire albums. As with all the Empire incarnations this album features the amazing talent and skill of Peter Banks, who has been called the Architect of Progressive Rock.”

Drummer Mark Murdock explains, “The Peter Banks Empire ship set sail against the ever-changing music world, and was uncompromising in producing a range of material with Peter Banks' 'Signature Guitar Sound and Style,' while incorporating themes of the time period in which the band existed and also reliving the past by playing songs from the early Empire catalog and even a YES version of ‘Something’s Coming.’ There are various tracks on ‘The Mars Tapes’ that also represented a ‘Work In Progress,’ which were both instrumental and vocal orientated. Empire was anticipating to make some big waves in the music scene, but the waves never reached the shore- until now!”