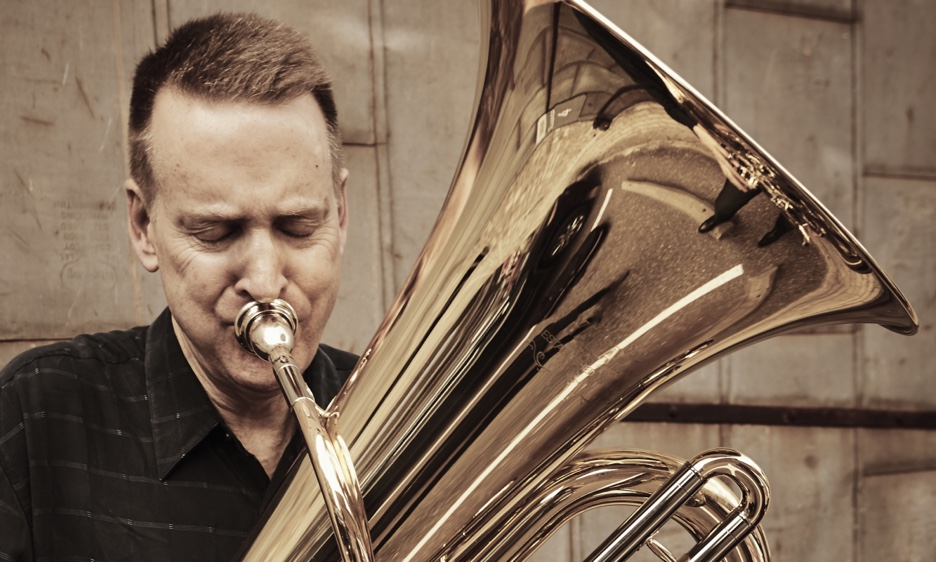 SOURCE: RALPH HEPOLA
June 30, 2020
Sign in to view read count
The tuba, like the banjo and the accordion, has sometimes had an image problem during the past century. While it has had an important role in classical music and early New Orleans jazz, the tuba has often been associated with Dixieland, amateur bands, and comedy. There have been exceptions such as its use in the Miles Davis Birth of the Cool nonet, Gil Evans’ groups, and Howard Johnson’s tuba ensemble Gravity. There have also been around a dozen impressive tuba players in modern jazz, but those accomplishments have sometimes been overshadowed by the stereotype. However Ralph Hepola’s recent CD, simply called Tuba, makes a strong case for the use of the tuba as the lead instrument in a jazz quartet with piano, bass and drums.

“I’m very well aware,” says Hepola, “that although the tuba has been around in jazz since New Orleans, it is very unusual for a tuba to be leading a group of this type, but I want to give this a shot. Tuba is really the peak of what I have done so far.” For the groundbreaking project, he used some of the top jazz musicians from the Minneapolis-St. Paul area: pianist Peter Shu, bassist Daniel Arlig, drummer David Stanoch and, as a guest on two songs, guitarist Peter Lothringer. “I’ve known Peter Shu since 2007 and I have been working with the other guys since 2010, they are all great players. What I wanted to do with the recording was to show all of the different things that I can do on the tuba, and demonstrate the potential of the instrument while making good music.”

The songs on Tuba cover a wide range of styles including fusion (“Roots And Wings”), a Latin jazz song based on Kenny Dorham’s “Blue Bossa” (“Clarion Call”), the fast modal tune “Hepmobile,” the ballad “Blue Moment,” swinging bebop (“Phraseology”), a blues (“Ralph’s Riff”), a soulful song that would have been fit perfectly on a 1960s Blue Note album (“Through The Winger”), an old-fashioned blues with Hammond B3 organ (“Incoming Blues”), three Celtic Aires from Ireland and Scotland that are a bit reminiscent of the folk/jazz music that the jazz ensemble Oregon performed, and the rock/fusion song “American Landscape.” Ralph Hepola’s tuba somehow sounds natural in all of these different styles, playing with the creativity and power of a trumpet or trombone but in his own personal voice.

Ralph Hepola was born and raised in the Twin Cities of Minneapolis & St. Paul, Minnesota. He remembers seeing Louis Armstrong perform at the end of his career, and he enjoyed hearing gems from his father’s large record collection of jazz, classical and pop music. While he sang in school and started studying piano when he was eight, he switched course completely at the age of 12. “I wanted to play trumpet in my school’s band program but the music teacher already had plenty of trumpet players. I was told that if I took up the tuba and got good enough, I could switch to trumpet. But within a few days I had fallen in love with the tuba so I never switched. I also soon figured out that if I got good enough on an instrument that kids didn’t want to play like the tuba, there would be many more opportunities for me in the future. That’s how it worked out.”

Hepola joined the Musicians Union when he was 17 so he could work with the Minnesota Orchestra whenever they played a piece that needed two tuba players. He auditioned successfully for the United States Army Band and spent three years performing with the ensemble in Washington D.C. He met the legendary Arnold Jacobs who was the principal tubaist with the Chicago Symphony Orchestra for 44 years, taking influential and inspirational lessons with him. Hepola remembers with affection his period studying at Northwestern University where most of the brass teachers were members of the Chicago Symphony. Branching out from classical music, he played with the Jazz Ensemble I band, being featured on a Milcho Leviev piece. After graduating, the young tuba virtuoso became a member of the Basel Symphony Orchestra in Switzerland, staying five years and also performing with the Vienna Philharmonic.

“I didn’t want to be a foreigner for the rest of my life,” he remembers, “and I wanted to pursue other kinds of music beyond orchestral music including jazz and rock. I had been fascinated with improvisation since I was a kid, so I moved to New York City where I spent 1986-88 as a freelance musician.” During that period he played at the 55 Club several times and performed in a wide variety of settings including with traditional jazz groups, having his first gigs as a leader.

Returning to the Minneapolis-St. Paul area, Ralph Hepola went on tour with the Minnesota Orchestra (including performing at Lincoln Center), played in numerous operas, appeared with nationally touring versions of Broadway shows (including The Lion King, Parade, and Ragtime), and made many orchestral recordings. But he had the goal of playing the tuba as a lead instrument in a jazz group, and he worked towards making his dream a reality.

Hepola, who appeared at the Twin Cities Jazz Festival for four years in a row, led two bands in Minneapolis. Route 3 (which is no longer active) was a traditional jazz group with a strong tenor banjo player and a female singer, while HepTones is a quartet with his tuba in the lead. He recorded with both bands including a CD in which the two contrasting groups were both featured.

With the help of a grant awarded by the Southwest Minnesota Arts Council, Hepola was able to record Tuba which is available as both a CD and a digital download. Tuba, which features him leading HepTones, is his strongest recording to date and shows just what a tuba can do, at least when played by an artist on his level.

Ralph Hepola, who recently moved with his wife to Missouri, looks forward to the future with enthusiasm. “I’m going full speed ahead as an improvising tuba player. I plan to record again soon and I look forward to performing at more clubs, jazz festivals and arts center with my quartet, doing some regional touring. It has been a rewarding life so far and I want to make a real contribution to the music, seeing what the music world thinks of the tuba as a lead instrument.”

Scott Yanow is a jazz journalist and historian who has written eleven books including Trumpet Kings, The Jazz Singers and Jazz On Record 1917-76.