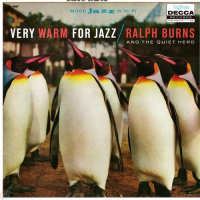 Years spent with Woody Herman from late 1943 on as a pianist and arranger gave Ralph Burns an edge when he needed musicians for his own leadership albums. In January 1958, during a period when he was orchestrating for artists signed to Decca, Burns arranged an album under his own name called Very Warm for Jazz. It featured an odd photo of penguins on the cover and a splendid mix of hand-picked pros for the sessions. The cover's reference to the “quiet herd" is a play on Herman's “thundering herd."

With Herman, Burns was probably best known for his arrangement of the moody mulitpart Summer Sequence (1946) and reedy Early Autumn (1948). Burt Korall, the liner-notes writer on Very Warm for Jazz, quotes jazz writer and editor Barry Ulanov on Burns:

“At the age of 21 [in 1943], he had reached the maturity as an arranger that no other scripters with bands except possibly Duke Ellington and Billy Strayhorn could match. With a taste for both the orchestra formulations of Stravinsky and the jazz ideas of Ellington, he was able to mass sections in three minute tone poems that had some of the eloquence of both his major influences, and to balance the mass of sound of his ensemble writing with solo passages of notably restrained and soft invention. In the Herman band he found sections and soloists to give that balance property articulation."

What makes this Decca album special is the soft, easy swing Burns uses on most charts—a chamber approach that gently animates each song cushions the soloist. In particular, it's always a joy to hear guitarist Barry Galbraith (above) in a small group and taking solos. Same goes for Urbie Green and everyone else in these groups.

As Burns says for the liner notes: “This album is a matter of moods. The writing is simple and essentially in a block style. The figures, by design, are familiar to the players and easy to execute. I wanted to put the players on familiar ground, so as to engender relaxation. Working with the soloist as my prime consideration, I felt it was my job to set the stage, intimate the mood, but I left it to the soloist to bring the central body of feeling and color to each tune." [Photo above of Ralph Burns by William P. Gottlieb in April 1947]

JazzWax tracks: Ralph Burns' Very Warm for Jazz isn't on CD, which is a shame. Perhaps Jordi Pujol at Fresh Sound will re-issue it. Here are four tracks from my vinyl release: The Gypsy; Swing Into Spring; My Heart Stood Still; Witchcraft