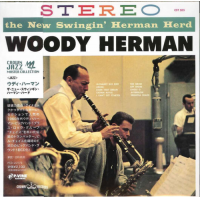 I'm on a bit of a Ralph Burns tear—listening to both the recordings I've owned for some time and grabbing those that I'm unearthing through a deep dive into his discography. What makes Burns special is that he could write beautifully for strings on one album and then tear your heart out with his charts for a big band date on the next.

Case in point: Woody Herman's New Swingin' Herman Herd recorded in March 1960 for the Crown label. This obscure album was recorded between Burns' Chant of the Weed chart for The Great Wide World of Quincy Jones (Mercury) and his arrangements for Ray Charles's album, The Genius Hits the Road (ABC Paramount).

The album was recorded in Chicago to show off Crown's stereo technology, and it was released on vinyl and 7 1/2-inch four-track tape. Which means it's perfect for blasting. It's an explosive swinger most of the way through. All of the arrangements are by Burns, with trumpet solos by Bill Chase and tenor sax solos by Don Lanphere.

JazzWax tracks: Woody Herman's New Swingin' Herman Herd was released in Japan on CD, which you may find on eBay. In the States, you'll find this one as a digital download here.