Ralph Alessi at Firehouse 12 This Friday 5/16

SOURCE: IMPROVISED COMMUNICATIONS
May 13, 2008
Sign in to view read count 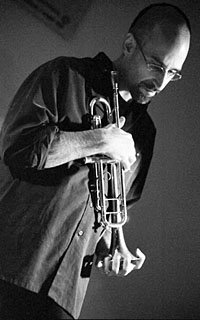 Critics called the band's second and most recent release, 2007's Look (Between the Lines), “an impressive new album" (Nate Chinen, New York Times), “intelligent, entertaining and stimulating" (Dave Wayne, jazzreview.com), a “quality release from a quality ensemble" (Kevin Le Gendre, Jazzwise) and “a solid example of Alessi and his colleagues using both the inside and the outside to their creative advantage" (Alex Henderson, All Music Guide). AllAboutJazz.com's Mark F. Turner adds, “The group is excellent at executing Alessi's eclectic and original pieces and making them enjoyable and seductively challenging. Look is an exceptional work by one of today's top trumpet players."

A native of the San Francisco Bay area, Alessi has been an integral member of New York's creative music scene since 1991. His eclectic discography includes multiple recordings with such frequent collaborators as Don Byron, Uri Caine, Steve Coleman, Fred Hersch and Sam Rivers. He also performs with the Jamie Baum Septet, Drew Gress and 7 Black Butterflies, the Jason Moran Octet and the Josh Roseman Project among other ensembles. His work as a leader includes four recordings and tours across the United States and Europe with his groups, the Ralph Alessi Quartet and This Against That. Also well-known as an educator, Alessi is the founder and current director of the non-profit School for Improvisational Music in Brooklyn and a member of the jazz faculty at New York University.