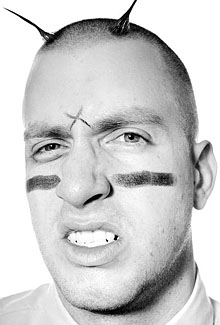 slideshow
Hyperactive free jazz drummer Weasel Walter will be spreading his intense style of spontaneous musical interaction in many venues across the U.S. and Europe this spring in the company of many notable improvisers like Evan Parker, Peter Evans, Mary Halvorson and Marco Eneidi. His upcoming release out March 15, 2009 is a trio record with West Coast guitar legend Henry Kaiser and bassist Damon Smith featuring some of the most extreme Kaiser playing in decades--half Sharrock/Takayanagi electronic bombast, the other half spiky, acoustic angularity which will please Derek Bailey adherents. Other upcoming recordings feature the Halvorson/Evans/Walter trio, and offering from a co-led ensemble with Cecil Taylor alumni Marc Edwards, a hardcore free jazz trio with multi-reedman Vinny Golia and more.

more information about Weasel Walter and his projects can be seen at ugEXPLODE.com. the upcoming dates follow.

This story appears courtesy of ugEXPLODE.
Copyright © 2020. All rights reserved.