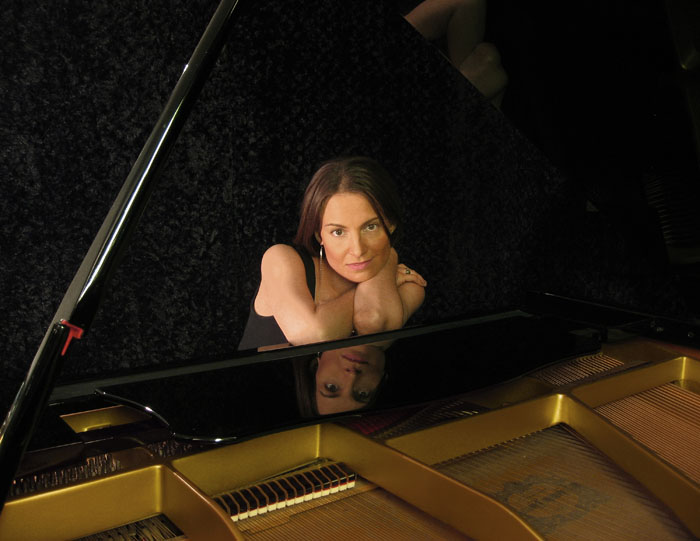 slideshow
Berkeley singer/songwriter/pianist Rachel Efron will appear at Yoshi's Oakland on Wednesday, November 4, in support of her new album, 4AM, which was just released in August by Efron's Whisper Track Records.

4AM calls upon the inspired musicianship of both Bay Area and international talent. It was produced by the masterful Jon Evans (bassist for Tori Amos) and features performances by Evans on bass and guitar, Jon Arkin on percussion, Dan Feiszli on bass, Joel Behrman on trumpet, trombone, and flugelhorn, Lylia Guion on violin, and Marcie Brown on cello. All of these musicians will be performing with Efron at Yoshi's.

As depicted on the album cover, 4AM is a portrait of a woman stepping bravely forward in her life, but with a final glance over her shoulder at the rich complexity of her past. There is a sense of defiance throughout the album, as though this step is taken painfully and at all costs, but there is also the quiet poise--and from time to time comedic cynicism--revealing the spirit of an artist loath to present only one shade of a story. Efron moves unabashedly between the soulful and the playful, the sweet and the commanding, but no matter what the mood, she offers her music sincerely--as an invitation to join her in an inner landscape at once beautiful, dangerous, serene, and startling.

Utterly laid-back piano pop that sucks the tension right out of the room. Efron makes it sound easy but there's a reason so few artists get it right.
Nate Seltenrich - East Bay Express

Rachel Efron combines a light, gentle touch on the piano with the eye and the voice of a poet to make some of the loveliest music one has heard--soft, intimate, ethereal, and strikingly genuine.
Chris Patrick Morgan --San Francisco Examiner

David Wiegand of the San Francisco Chronicle wrote of 4AM: “The voice is airy, plaintive, the sound, at first, seemingly detached, but it isn’t long--about three notes will do it—before Bay Area singer-songwriter Rachel Efron hooks you by the heart. . . . Efron’s deceptively effortless piano pop stands out from the pack because of her delicate lyricism. . . [Her] classically influenced piano dominates the arrangements, but that is as it should be: This is a woman taking charge.”