SOURCE: JAZZ ONLINE BY JOSEPH VELLA
May 26, 2011
Sign in to view read count 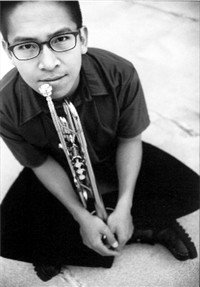 slideshow
Cuong Vu has been one of the most creative musicians in jazz since the late 1990's. I remember first hearing his album Bound in 2000 and being blown away by the sheer scale of the music featured on that recording. His later album called Come Play With Me was even better. In 2003, I remember seeing him perform brilliantly with Pat Metheny Group&#151a stint that lasted for many years. What's so exciting about Cuong is that he is unpredictable and his music contains a great variety of moods and textures that consistently take the listener on spectacular aural journey. When I got a hold of his latest recording Leaps of Faith, it was another reminder of how special he is as a trumpeter, band leader and innovative voice in jazz. We got a chance to talk to Cuong Vu about his new album, influences and more in this Q&A.

What was the first album you ever purchased?

I don't know if I should be admitting this but...the soundtrack to Grease. You can store that under guilty pleasures. Acutally...when I've listened to some of those tunes again, I thought they were very well written and performed. And I still get as into it as I did as a kid.

Who are your main musical influences & why?