Producer Orrin Keepnews To Be Honored At A Memorial Concert At Yoshi's, Oakland, Nov. 29

What a fabulous storyteller Orrin was and what a force in music! --David Harrington, Kronos Quartet 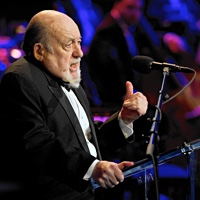 slideshow
When Orrin Keepnews passed away at his El Cerrito home on March 1, the day before his 92nd birthday, he left behind an unparalleled legacy as a jazz producer, advocate, and entrepreneur. Keepnews’s brilliant career spanned more than 60 years, during which time he founded three forward-thinking labels (Riverside, Milestone, Landmark) and produced hundreds of major jazz artists including Thelonious Monk, Bill Evans, McCoy Tyner, Cannonball Adderley, and Mulgrew Miller.

Several of the artists he worked closely with—vocalist Wesla Whitfield, pianist Mike Greensill, saxophonist Dave Ellis, and Kronos Quartet—are Bay Area-based and will be among the performers at the Orrin Keepnews Memorial Concert, scheduled for the afternoon of Sunday, November 29 (1:00-3:15pm) at Yoshi’s in Oakland. Bassist John Wiitala and drummer Lorca Hart will round out the Dave Ellis-led “house band” for the occasion. Proceeds from the benefit concert are earmarked for the Orrin Keepnews Scholarship Fund at the California Jazz Conservatory.

“I met Orrin in the Washbag [the legendary San Francisco watering hole] in 1984," recalls Greensill. “I was playing a saloon piano and had just finished a version of Cy Coleman’s ‘It Amazes Me’ when I felt a tap on the shoulder and this guy says, ‘I didn’t know anybody still knew that song.’ And so I met, and drank with, Orrin Keepnews, a man with impeccable taste in songs, singers, and saloons. We became friends and I introduced him to my wife Wesla Whitfield and the rest, as they say is history.”

“Orrin Keepnews was a master record producer,” says Whitfield. “His decision to sign me to his Landmark Records label was the beginning of a wonderful recording relationship that spanned 16 albums. Orrin loved the ‘songbook’ as much as he loved jazz. He once told me that it was Cannonball Adderley who introduced him to legendary cabaret singer Mabel Mercer.”

“Orrin and I first met when we were both on a panel for the California Arts Council, after which he drove me home from Sacramento,” says David Harrington, Kronos Quartet’s violinist and artistic director. “What a fantastic drive that was—Orrin introduced me to the life of Thelonious Monk in the most riveting way, with his detailed accounts of various recording sessions and intriguing stories. What a fabulous storyteller Orrin was and what a force in music! By the time he dropped me off at my home we had it figured out that Kronos would record an album of Monk’s music for Orrin’s new label Landmark Records. I felt almost like I was on a first-name basis with Thelonious Monk because of Orrin’s vivid recollections. And so began our 31-year friendship...”

In addition to the musical performances by the above-named artists, other musician friends will be on hand for a jam session, and friends and family—including Orrin’s widow, Martha Egan, and his sons Peter and David Keepnews, flying in from New York City—will offer commentary from the stage.