As impresarios and presenters, women run jazz in Los Angeles. And Barbara Brighton is one of the important ones who make it possible for the music to be heard in this town. —Kirk Silsbee, jazz journalist 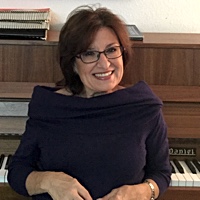 In a ceremony taking place on Friday, May 3, 2019 at the Los Angeles County Museum of Art's (LACMA) Friday Night Jazz Series, Barbara Brighton will be presented with the Jazz Hero Award, given by the Jazz Journalists Association and presented by jazz journalist Kirk Silsbee and 2016 Jazz Hero Edythe Bronston.

Barbara Brighton’s lifelong love of jazz has bloomed in advocacy and activism. She has provided an important Los Angeles performance showcase for student musicians, the Young Artist Jazz Series, for 23 years. Innumerable young players, including more than a few nationally known musicians, received their first public exposure on the Catalina Bar & Grill’s bandstand that Brighton has presided over. It’s no exaggeration to note that nearly all SoCal jazz musicians under 45 have participated in YAJS. While she has a 40-plus career as a licensed psychotherapist, Brighton’s efforts to produce a competition for student musicians launched her role as impresario. Her consultations with the late recording executive Ellen Cohn proved invaluable, leading to Brighton’s founding of BJB Jazz Ventures. Barbara produced jazz brunches and memorial tributes to Cohn, Carmen McRae and Horace Tapscott. At the behest of the late Bill Traut, Kurt Elling’s manager, she booked the singer into every SoCal jazz venue for a solid month; then Blue Note Records hired her to do the same for Caecilie Norby. Barbara also handled promotion of pianist Kenny Werner’s book Effortless Mastery in Los Angeles.

She initiated the Young Artist Jazz Series in 1996 with the help of club owner Catalina Popescu (the JJA’s 2012 Los Angeles Jazz Hero). Schools with jazz programs suddenly had a destination and reliable venue; schools without jazz programs gained added incentive. Families and listeners who might not have ever stepped into a jazz club were newly part of the Catalina’s audience.

An A&R position for the MAMA label led Brighton to another aspect of jazz work as an independent record producer. She co-produced The Stan Kenton Celebration — Back to Balboa (MAMA). In 1999, she produced singer and songwriter Mark Winkler, known as a smooth jazz performer. The CD, Easy the Hard Way, set Winkler in the mainstream jazz realm, along with five more Brighton- produced Winkler albums, which have all charted and received glowing reviews. In 2005, she produced Judy Wexler's debut CD Easy on the Heart, pairing her with piano great Alan Pasqua. The CD was a critical success and launched Wexler’s burgeoning jazz career. Brighton went on to produce Wexler’s two subsequent CDs, both highly regarded by critics and radio programmers nationwide, as well as serving as Associate Producer on Wexler’s upcoming CD, Crowded Heart. Other production credits include Happy to Be for veteran jazz vocalist Julie Kelly, which was a favorite of jazz critics coast-to-coast. In 2018, she produced vocalist Gary Brumburgh’s Moonlight and Beverley Church Hogan’s Can’t Get Out of This Mood, which were both excellently received. Barbara has become a major player in advocating for Los Angeles jazz singers and their songs.

With all of the music she’s heard and facilitated in her life, Jazz Hero Barbara J. Brighton’s greatest satisfaction comes from hearing graduates of her Young Artist Jazz Series in a club or a concert, knowing she’s played some part in their musical success.