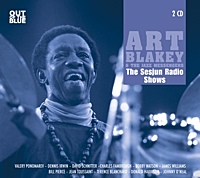 Art Blakey is, of course, universally regarded as one of the major pioneers of modern jazz drumming. For over 30 years his band, The Jazz Messengers, existed as a proving ground for some of the finest young musicians in jazz, many of whom would go on to become legends in their own right.

These sessions, recorded live for the highly acclaimed Dutch Radio show Tros Sesjun, present several versions of The Jazz Messengers dating from the late '70s to the early '80s.

This double-CD is the second release in the series, “The Sesjun Tapes," featuring concerts from the archives of Tros Sesjun. This weekly radio program featured live jazz from 1973 to 2004. The first release featured Chet Baker (review copies are available). The third set in this series will feature performances by Bill Evans, featuring his trios with Eddie Gomez/Eliot Zigmund, Marc Johnson/Joe LaBarbera, and special guest Toots Thielemans.