SOURCE: ALL ABOUT JAZZ
November 2, 2016
Sign in to view read count 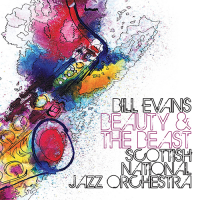 Bill Evans studied under Liebman, but they have more in common than that, for both men can claim the privilege of having playing alongside Miles Davis. Today, Evans is one of the most dynamic saxophonists of his generation, and he brings all of his trademark energy and muscularity to a demanding piece of music. Not least of those demands is the requirement to contrast lyrical beauty with bestial fire and fury.

Smith’s Beauty and the Beast is no fairy tale though. It is a jazz essay on the dualities of the human psyche, and the SNJO guides the listener through its seven-part examination of good and evil with fearless authority. The rhythm section of Steve Hamilton (piano), Kevin Glasgow (electric bass) and Alyn Cosker (drums) are particularly commanding, and provide a rock-solid platform for Evans to solo freely and in uninhibited style.

The music was originally premiered at the Glasgow Jazz Festival in 2001 with Liebman as featured guest. That performance, described by the Glasgow Herald as “Ambitious in scale, dense in structure, (and)… exhilarating in its sense of controlled freedom,” of course set the bar very high.

Nevertheless, the supercharged upscaling of the score on this recording, with Bill Evans at its turbulent epicentre, escalates the action and brings a heightened sense of drama to the work.

In his review of a live show featuring Evans in 2011, Rob Adams observed that, “…the version of Beauty and the Beast that he (Smith) produced for saxophonist Bill Evans was quite different from my recollections of the one premiered with Dave Liebman. This one rocked, and by introducing bass guitar Smith not only gave Evans the propulsion he’s been generally accustomed to, he took his own writing, and thus SNJO, into the realms of Gil Evans' later work and George Russell's Living Time Orchestra.”

Commissioned by the SNJO with support from Creative Scotland.