Playboy Swings: How Hugh Hefner And Playboy Changed The Face Of Music

A comprehensive and wildly entertaining new book from the author of The Persian Room Presents offers a fresh perspective on the Playboy empire and its influence on popular music. 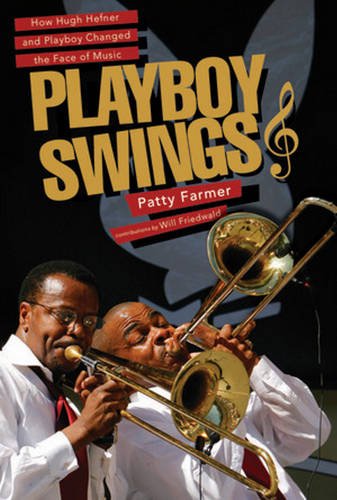 Since the launch of Playboy magazine in 1953, two elements have been remarkably consistent: the first is the celebration of the world’s most beautiful & desirable women and the second is its involvement with music. The Playboy experience was never just about sex—it was about lifestyle. And music—particularly the finest jazz, a personal passion of Hefner’s—has always been an essential component of that lifestyle.

While many books have been written about the Playboy organization and the ultimate playboy himself, Hugh Hefner, no book—until this one—has focused specifically on Playboy and the music scene, its impact on popular entertainment (and vice versa), and the fabulous cadre of performers who took to the stages of the mythic Playboy Clubs and Jazz Festivals. Patty Farmer’s Playboy Swings is a groundbreaking look at Playboy through a new lens: music.

In addition to its renowned coverage of music in the magazine, Playboy began to sponsor a series of historic jazz festivals, starting with the groundbreaking 1959 Playboy Jazz Festival in Chicago celebrating the magazine’s 5th Anniversary. Twenty years later in 1979, Hef enlisted George Wein, the world’s most famous jazz impresario, to help him revive the Playboy Jazz Festival at perhaps the most famous music venue in the world: The Hollywood Bowl. This annual event continues to this day, attracting legendary stars, tens of thousands of ticket-buyers and employing the talents of thousands of musicians.

It was the success of that inaugural jazz festival that gave birth to the idea of the Playboy Club which opened its first doors in Chicago on February 29, 1960. And once the clubs took hold, it was only natural that they would offer live performances featuring the sort of music the magazine endorsed. As much as anything—including the clubs’ iconic Bunnies—the music presented at the clubs set the tone of the organization and kept patrons coming back for more.

From the first issue of the magazine, music enjoyed pride of place, and by 1957, Playboy had launched its “All Star Poll," in which readers were invited to vote for their favorite musicians and acts. This led to what was, at the time, a rather bold step for the young company: Playboy began to produce records. Now, Playboy was doing more than discussing or reviewing music; it was actually presenting it.

Two months after that first Jazz Festival in October 1959, Hefner launched his first TV project, Playboy's Penthouse, and all the top-notch performers and musicians dropped by. Comics made the scene as well, including the legendary Lenny Bruce on the very first show. A later foray into television, Playboy After Dark (1968), was no less welcoming to the artists of the day. This time, traditional pop singers such as Vic Damone and Johnny Mathis shared the bill with the likes of Ike and Tina Turner and Sonny & Cher.

At its peak, Playboy was the largest employer of talent in the country.The Playboy Clubs reached their apogee in the mid-to-late 1960s, and nothing like the wide-ranging Playboy “circuit” for entertainers had been seen since the Golden Age of VaudevilleBy the time the clubs began losing momentum in the late ‘70s, Playboy had spent several decades shaping American musical taste and cultural values.

While music may not be the first thing you think of when you hear the word Playboy, it should certainly be in the top two—and Playboy Swings is meant insure that. Compiled with the cooperation of hundreds of people who were on the scene throughout Playboy’s rise, fall, and renaissance, Playboy Swings carries readers on a seductive journey through the history of the empire—all the while focusing on the entertainment that made it unique.

Featuring candid, in-depth interviews with a multitude of musicians and singers, as well as those involved behind the scenes, the book moves from the inception of the Playboy Empire through the 1959 jazz festival, to the opening of club after club. Throughout the book, it is the artists who do most of the talking—and they have a lot to say about the golden era of

Playboy entertainment. The result is a fresh take on one of the great social and cultural institutions of our time, as well as a unique first-person history of American popular performance in the second half of the 20th century.

“Playboy, (Hef), has been a good friend to music in general, but especially jazz. We need him again!” —Al Jarreau

“You weren’t taken seriously if you didn’t have a Playboy key!” “Hugh Hefner didn’t care if you were black, white or purple, only if you were funny or could sing.” —Dick Gregory

“God Bless the Playboy Clubs and Hugh Hefner, they made Gregory, Dad and myself stars!” —Maurice Hines

Now, in the 21st century, the clubs are starting to come back to life. There's a new second-generation London Club, which opened in 2011, that is packing them in nightly and a new generation is discovering the magic and legend of the Playboy mystique.

“For anyone interested in the good old days of jazz, rye old-fashions and life after dark, this book brings back the music, rough glamour and excitement of the Playboy Empire in all their exhilarating, ground-breaking glory. Playboy Swings is well-researched, breezily written, incredibly informative, and a lot of fun." —Rex Reed

“Playboy Swings is an intimate look at what went on in the clubs, the racial barriers they helped to eliminate, and the careers that skyrocketed from the Playboy Club stages. This is as entertaining as an evening at a club itself. Four “Bunny Tails" for the effort.” —Bill Boggs, Television Host & Producer