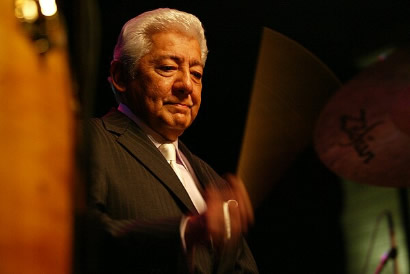 The group will replace Los Van Van, who regretfully have had to postpone their upcoming tour. “The coordinators of the tour of Los Van Van regret to announce that, due to an unresolved business matter between the group and a third party and circumstances beyond their control, the U.S. tour of Los Van Van must be postponed. This decision had nothing to do with the U.S.-Cuba relations or any visa issues. Their I-129 visa petitions were approved. We hope to bring Los Van Van to the United States soon after the resolution of the factors that prevented us from realizing this tour at this time." said Bill Martinez, representative for the group.

Band leader, multi-instrumentalist, and master timbale player, Grammy-nominated Pete Escovedo has been a major force in Latin music since the late 1960s. Escovedo is the patriarch of a gifted musical family which includes his children Sheila, (aka Sheila E., vocalist and drummer), Juan (a conguero and percussionist), and Peter Michael (drummer). This is their second appearance at the Festival as The Pete Escovedo Orchestra. The Playboy Jazz Festival takes place Saturday and Sunday, June 12th and 13th at the renowned Hollywood Bowl. For tickets and information regarding the Playboy Jazz Festival, please call the hotline at 310-450-1173 begin_of_the_skype_highlighting310-450-1173end_of_the_skype_highlighting or visit our website.